After Barnabas vows to defeat the Leviathans, he is attacked by a bat.

Night over Collinwood. A night of decision, for Quentin has agreed to tell Carolyn of the Leviathans, their evil plans for her, and their part in the recent murders. He has begun by telling Carolyn that Jeb Hawkes murdered her father.

Quentin tells Carolyn that Jeb murdered her father. Before he can explain further, Jeb rushes in, claiming Lawrence has been murdered, and Philip confessed to all of the murders that have recently been taking place.

Carolyn is in shock and Quentin tells Jeb he doesn't believe him. Quentin questions Jeb about Philip's intentions, but Jeb is evasive in his answers. Carolyn goes to use the phone, while Quentin and Jeb continue to exchange theories as to how Philip is or is not the murderer. Barnabas soon shows up and is shocked to learn what Philip has done.

Carolyn leaves to inform Elizabeth about the recent developments. Barnabas scolds Jeb for what he has done and tells him he will never get away with it, and finally reveals his true intentions that he will always fight the Leviathans. Carolyn and Jeb leave to go visit Megan, despite pleas from Barnabas not to. Once they leave, Barnabas tells Quentin he must find the Leviathan Box.

Inside the Chosen Room, Jeb takes the vampire bat and puts it inside the Leviathan Box.

Jeb goes downstairs and tries to calm Carolyn down, who is still distraught. Carolyn admits she has feelings for Jeb, but doesn't like how he is harsh to people.

Barnabas and Quentin leave Collinwood, determined to break into the antique shop and destroy the Leviathan Box.

Barnabas and Quentin arrive at the antique shop.

Meanwhile, Carolyn falls asleep in the drawing room at Collinwood and has the same dream she had a few nights ago, where Jeb admits he has had previous identities, except this time a door opens in the antique shop and she sees the dead inspector. She rushes out of the antique shop as Jeb claims she didn't see anything.

Barnabas leaves the antique shop with the box, but has Quentin stay behind to keep an eye on Jeb. He takes the box to the Leviathan Altar, and announces he is done serving the Leviathans. As he is about to destroy the box, it opens and he is attacked by the bat.

Quentin: The only place we could have met is the one place I've never been, Jeb: Hell.

Jeb (to Barnabas): You just love listing my crimes, don't you? Well, why don't I list one of yours? A very serious one. Treason.

Jeb: Yes, Barnabas. Philip and I will be left. And you...you will be the hunted, the tormented, the lost.

Quentin: I'm going to have to kill that man.

Dark Shadows - Episode 950 on the IMDb 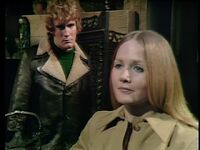 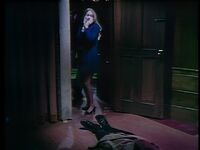 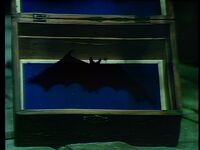