A seance is held to contact the spirit of Josette Collins.

Barnabas Collins has seemingly proved his loyalty to the Leviathans by saving Jeb from the werewolf. But their truce is an uneasy one. While it lasts, Barnabas hopes to marshal his strength, unaware that on this night, Jeb is in the graveyard, ready to summon the evil creature that can turn Barnabas into a vampire forever.

Jeb goes to the graveyard to summon a vampire bat. He is successful, and traps the bat in a cage, promising to introduce him to Barnabas very soon.

Barnabas arrives at Collinwood, where he tells Julia that he has reconciled with Jeb. He is still uneasy, as their truce is fragile at best, and he worries about what will happen to everyone at Collinwood. Barnabas confesses that he is still worried about Josette, whom the Leviathans are holding hostage.

Jeb returns to the antique shop with the bat still trapped. Philip asks what Jeb has with him, and accuses him of intending to kill someone. Jeb tells Philip he has the wrong idea, and is going to do something about it.

Back at Collinwood, Barnabas conducts a seance with Julia and Maggie to contact Josette. They are successful, and Josette speaks through Maggie.

Josette, speaking through Maggie, tells Barnabas that she knows nothing of the Leviathans, and she committed suicide by taking the poison the night Barnabas was captured. Josette tells him things will be better if they are free of each other. She asks him to visit her grave. Barnabas stops the seance and decides they need to find the Leviathan Box and destroy it. Carolyn walks in to use the telephone and calls Jeb. They arrange to go on a date, much to the dismay of Barnabas, Julia, and Maggie.

Barnabas reveals his true loyalties to Philip, who confesses that he is not a loyal Leviathan either. Philip cannot forgive them for the murders, and truly hates them for what they've done to Megan. Barnabas asks Philip to steal the Leviathan Box from Jeb, and Philip agrees without thinking twice.

Jeb arrives at Collinwood for his date with Carolyn. He confesses his true feelings for her, and the two share a passionate kiss.

Barnabas visits Josette's grave, and her spirit appears to him. She tells him that she belongs to the past, and he must look to the future and find love with someone else. She returns the ring he once gave her and urges him to give it to another woman, much to Barnabas's dismay. He tells her there will never be anyone for him but her, and she tells him he will be lonely, as he cannot have her. She leaves him forever.

At Collinwood, Carolyn admits to Jeb she had a nightmare about him the other night. Jeb is initially upset about what Carolyn has told him, and tells her that they are going to meet Bruno for a drink at the Blue Whale. Barnabas walks in, and Carolyn decides to go to her room for the night, leaving Jeb by himself. Once Jeb leaves, Barnabas calls Philip and tells him it's time to steal the Leviathan Box.

Philip enters the Chosen Room at the antique shop and finds the Leviathan Box in the closet. Jeb shows up right as Philip is about to leave the store and catches him.

Josette's Ghost: It is I. And I will tell you what you must know, now and forever. You asked me if the Leviathans held me prisoner. They do not. But you hold me, just as I hold you with my love. But now the time has come for us both to go free.
Barnabas: I cannot be free without you.
Josette's Ghost: But you must. For I belong to the past. For you there is a future with someone else.
Barnabas: But I don't want anyone else.
Josette's Ghost: Then you must be lonely for you cannot have me. But you will find someone else. I know it. And when you do, give her this. The ring (Josette's engagement ring) that you gave to me, give to her, whoever she may be. This ring is a sign of your freedom and of mine.
Barnabas:  Josette, you can't leave me. You can't now. It's too cruel!

Jeb (to Carolyn): I don't want you to care about me. Caring is for distant cousins and elderly aunts.

Dark Shadows - Episode 948 on the IMDb 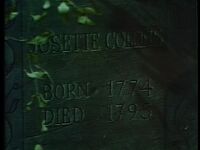 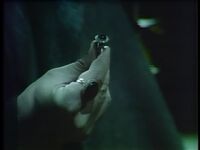 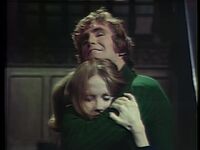 Carolyn & Jeb
Add a photo to this gallery
Retrieved from "https://darkshadows.fandom.com/wiki/948?oldid=140540"
Community content is available under CC-BY-SA unless otherwise noted.