Angelique reveals to Sky that Barnabas is fighting the Leviathans.

Soon it will be dawn. But in the short time that remains of this night, one young man will experience a kind of terror he has never known before. The evil and mysterious Jeb Hawkes fears only one creature on Earth: the wolf who walks like a man. And it is that creature who will find him this night.

Jeb runs into the Old House, shouting for Barnabas's help. The werewolf crashes through a window and confronts him.

Jeb and the werewolf engage in a fight. The werewolf gains the upper hand and knocks Jeb unconscious. Before the werewolf can finish Jeb off, the sun rises and he turns back into Chris. Barnabas returns shortly thereafter and finds both men laying on the floor. Barnabas escorts Chris out of the house and instructs him to come visit him later in the day. Jeb soon wakes up and Barnabas tells him that he fended the werewolf with his silver-headed cane. Barnabas reassures Jeb he is loyal to the Leviathans. Jeb counters, and demands to know why he moved Carolyn to the Rumson Mansion. Barnabas says he only did it because he felt Jeb was moving too fast. Jeb confesses that he went to Carolyn in his true form, and says he wants Carolyn to accept him in his human form.

At the Rumson Mansion, Angelique arrives home, furious at Sky for sending her to the airport when he came home alone.

Sky apologizes for the mix-up at the airport and says he rushed home so he could receive an important phone call. Angelique appears to forgive him. She is surprised to learn that Elizabeth returned to Collinwood the night before, and worries about Carolyn. Sky insists that Carolyn is perfectly alright. Barnabas arrives soon after and Angelique introduces Barnabas to Sky. Barnabas gets a few minutes to speak to Angelique alone, and tells her that Jeb was in her house last night. Angelique is amazed that he was there, and relieved that Sky didn't see him. Barnabas tells her that because of something that happened recently, Jeb has no doubts about Barnabas's loyalty. Angelique tells him she was happy to help, and is very happy that it's over.

Once Barnabas and Carolyn leave, Sky confronts Angelique about their recent house guests and insists that she's keeping secrets from him. She denies it at first, but reluctantly confirms that Carolyn was not just brought there for her health. Angelique tries to leave it at that, but Sky reminds her that they swore never to keep secrets from each other and is deeply upset from her doing it. She finally gives in, and tells him everything she knows about the Leviathans and Barnabas's plans to stop them.

Later that day, Sky shows up at the antique shop, and offers to tell Jeb the truth about Barnabas.

Chris returns to the Old House to ask Barnabas what happened to him the previous night. Barnabas confirms he didn't kill anyone, but he needs to be very careful around Jeb from now on.

That night, Jeb is walking around the cemetery with a cage. He approaches a grave and performs a ritual. A vampire bat appears and Jeb traps it in his cage.

Chris: Why do you keep protecting me?
Barnabas: Because you need to protected, from him!

Dark Shadows - Episode 947 on the IMDb 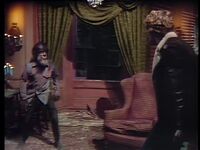 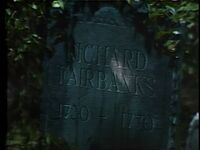 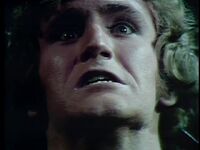