Jeb decides he wants Carolyn to be his partner willingly.

An urgent phone call from a strange young man has brought Elizabeth Stoddard back to the great house of Collinwood. She is not aware that the purpose of the call was to get her to leave her daughter, Carolyn, alone in another house, on an island fifty miles distant. And now, in that house, Carolyn Stoddard is in the greatest danger she has ever known.

Carolyn wakes up and hears the sound of breathing. As she calls out for Sky, the bedroom door opens and she screams.

Carolyn sees Jeb in his true form and faints. He turns back into his human form and helps her up, saying he couldn't go through with it. Sky enters the room and finds Jeb has returned Carolyn to her bed. He asks Jeb what went wrong, and Jeb tells him he decided not to go through with the ceremony tonight. He didn't want to frighten her. Sky is worried that Carolyn will remember seeing Jeb in his true form, but Jeb doesn't seem concerned. He wants her to be attracted to Jeb Hawkes, and not as the Leviathan creature. Jeb leaves the house, saying he will return to Collinwood to visit Elizabeth.

Elizabeth is pacing through the drawing room at Collinwood, and hears the werewolf in the distance. She goes to the phone, but Bruno appears and demands she put the phone down.

Elizabeth demands to know who he is and why he is wandering around Collinwood. He shows her his Naga ring, and she realizes he is there to give her instructions. As the two talk in the drawing room, they again hear the werewolf, this time sounding much closer to the house. Elizabeth tells him the werewolf has tormented Collinwood before. Bruno decides to go outside so he can "finish it off," because it's looking for Jeb.

Back at the Rumson Mansion, Carolyn awakens as Sky watches over her. She can't remember what has happened, much to Sky's relief.

Jeb arrives at Collinwood and meets Elizabeth. He asks where Bruno is, and Elizabeth tells him he is out searching for the werewolf.

Jeb inquires as to who gave the order to send Carolyn to the Rumson Mansion, and Elizabeth tells him it was Barnabas. He tells her that Barnabas is no longer in charge. The phone rings; it's Carolyn. She asks if everything is alright at Collinwood. Elizabeth gives Jeb the phone, and Carolyn seems pleased to speak with him. Bruno returns to Collinwood, and Jeb tells him that Barnabas must be dealt with.

As Jeb makes his way to the Old House, he hears the werewolf following him. He rushes inside, calling out for Barnabas, but he is nowhere to be found. The werewolf sees Jeb through the window and crashes into the drawing room.

Dark Shadows - Episode 946 on the IMDb 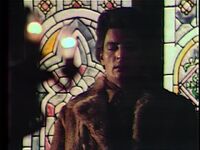 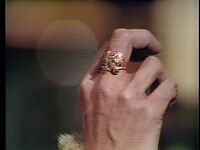 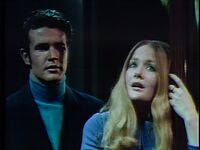 Escape to Danger
Community content is available under CC-BY-SA unless otherwise noted.
Advertisement