While she is in hiding, Carolyn has a nightmare about Jeb.

Carolyn Stoddard has been away from the great house at Collinwood for almost a week now. No one knows better than Barnabas Collins of the terrible fate she would have met had she not left Collinwood when she did: marriage to Jeb Hawkes in his true nature, as the creature in the upstairs room of the antique shop. Thus far, only Barnabas knows where Carolyn is being hidden.

Carolyn tells her mother that she feels plenty rested and would like to return to Collinwood. She also wonders if Elizabeth might have wanted to get away from Collinwood, as she's noticed a change in her mother's behavior recently. Elizabeth denies that anything is different about her.

Angelique enters the room and Elizabeth asks how she knows Barnabas. Angelique tells her that they met in England at a party, where she was working as a model. Elizabeth still is trying to place where she'd met Angelique before. Angelique insists she's confusing her with someone else. Sky calls Angelique and asks her to pick him up at the Logansport Airport. She reluctantly leaves her two houseguests alone. Soon after her departure the phone rings again, and Elizabeth answers. Jeb introduces himself to her over the phone, and orders her to return to Collinsport immediately by herself. She complies.

Elizabeth departs the Rumson Mansion, leaving Carolyn by herself. Carolyn wonders to herself why she can't stop thinking about Jeb. Supernatural forces begin to wreak havoc in the drawing room, frightening Carolyn. The power goes out and she hears footsteps, and she rushes upstairs. Later, she hears music playing and sees the shadow of a man behind a door. She opens the door and finds Sky.

Sky apologizes to Carolyn for what has happened. After she calms down, he leaves the room and Carolyn falls asleep. In a dream, Carolyn rushes into the antique shop, searching for Jeb. Jeb appears and shows her his birthmark, and reveals that he, Joseph, Alexander, and Michael are all the same person. He begs Carolyn to embrace him, but he has blood on his hands. Jeb tells her that Carolyn needs a new existence, and he can give it to her. She violently awakens, and Sky takes her up to her room. After they leave, the sound of breathing is heard from outside.

Sky returns downstairs and opens the front door. Later, a trail of ooze and seaweed is seen in the drawing room. Carolyn wakes up to the sound of breathing. As she calls for Sky, her bedroom door opens and she screams.

Dark Shadows - Episode 945 on the IMDb 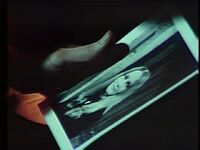 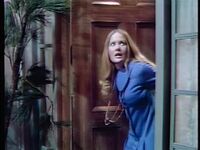 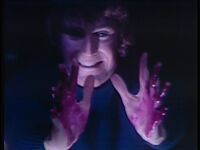 Another Bloody Dream Sequence
Community content is available under CC-BY-SA unless otherwise noted.