Chris transforms into the werewolf; Bruno goes hunting to find the beast.

The full moon has begun its rise, and Chris Jennings is about to take the most desperate gamble of his life. Alone in his cottage on the great estate, he waits for the moon to change him into a werewolf, hoping he can retain his human intelligence and will long enough to do what must be done to end the curse. For this flower, brought to him by Sabrina Stuart, is the legendary moon poppy, and if he can succeed in eating its blossom, he will shed the hated animal form forever.

At night, the full moon rises and Chris begins to transform into the werewolf. He reaches out for the moon poppy.

Chris takes the blossom and is about to eat it when he suddenly throws it to the ground and leaves the house.

At the antique shop, Jeb is on the phone with Maggie, pretending to be under his control, but she still hasn't found out where Carolyn is. Jeb gets upset and hangs up on her. Bruno walks in and mocks Jeb about his feelings for Carolyn. In the distance, Jeb hears the howling of the werewolf and becomes increasingly terrified. Jeb explains that the werewolf is the only animal the Leviathans couldn't tame.

Meanwhile, Barnabas and Sabrina discover the crushed flower on the floor. Sabrina is heartbroken, and fears that nothing can ever be done to save Chris. Barnabas tries to comfort her, but she suddenly realizes that she must go to Chris's side. She believes that he will not harm her, as he didn't before. Barnabas tries to reason with her, but she slips away while his back is turned. He runs into the woods after her.

Jeb is still terrified of the werewolf howling throughout Collinsport. Bruno decides to take matters into his own hands, and informs Jeb he is going to kill the werewolf.

Barnabas returns to Collinwood, having been unsuccessful in trying to find Sabrina. He receives a call from Angelique. She tells him that something has happened and he must come to her house immediately. Barnabas presses her for information, but she refuses to disclose anything over the phone.

The howling stops and Jeb decides to go outside to see if Bruno has killed the werewolf, but Barnabas stops him. He again tells Jeb that Carolyn isn't ready yet. Jeb demands information about a werewolf in Collinsport, but Barnabas denies the existence of one. Jeb tells him he is going to kill the werewolf before the werewolf kills him.

Sabrina tries to communicate with the werewolf. He approaches her, but Bruno shows up and shoots him. The werewolf runs away, but Bruno is surprised to find Sabrina is more worried about the werewolf than herself.

Barnabas arrives at Angelique's house, and she explains that Elizabeth is starting to recognize her as Cassandra, but just hasn't made the connection yet. Angelique is petrified that her former sister-in-law will soon identify her, and her life as Mrs. Rumson will be over. She reminds Barnabas that Elizabeth is a devoted Leviathan, and Angelique's identity could be devastating to their cause. She begs Barnabas to take Elizabeth and Carolyn back to Collinwood as soon as possible. Barnabas reluctantly agrees to take them away the next morning.

Bruno returns to the antique shop and tells Jeb about his strange encounter with Sabrina. Bruno decides to follow Sabrina, because she can probably lead them to the werewolf. After he leaves, Jeb receives a phone call telling him where Carolyn is.

Dark Shadows - Episode 944 on the IMDb 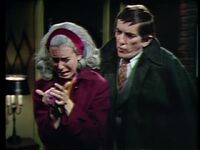 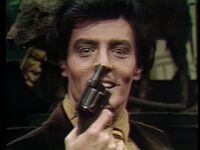 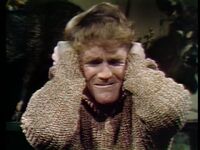 Fear of the Wolf
Community content is available under CC-BY-SA unless otherwise noted.
Advertisement