The night has been long and anxious for Barnabas Collins. Maggie Evans is missing, and no matter what he suspects, Barnabas can prove nothing. And so Maggie remains in the hands of a merciless enemy, who when he was a child called Michael, tried to kill her, and came close to succeeding. Now that same enemy calls himself Jeb, and he is bigger, stronger, and far more dangerous, surrounded by allies as merciless as himself.

A strange man shows up at the antique shop while Jeb is working. The man is wearing a ring bearing the sign of the Naga. He tells Jeb he will do anything for him.

The man identifies himself as Bruno, and claims to know all about Jeb. Jeb is somewhat suspicious, but Bruno offers to perform a task for him to show his loyalty. Jeb tells Bruno he is suspicious about Barnabas, but can't provide evidence of his suspicions. Bruno agrees to investigate.

At Collinwood, David and Barnabas are talking about what might have happened to Maggie. Barnabas is sure that Jeb has something to do with it, but David is skeptical, saying that now Jeb is older, he only does "good things." Barnabas instructs David to read the Leviathan Book for answers.

Maggie awakens in the crypt. She remembers the last thing she saw was Jeb in the woods. She tries to escape, but is unable to. Soon the door opens. Sheriff Davenport, as a zombie, enters the crypt.

Davenport tells her she has to stay in the crypt, and she needs to remain quiet for her own safety.

At the antique shop, Jeb has instructed Bruno to kill Maggie, but to make it look like it was an accident.

Bruno arrives at the crypt and orders Davenport to leave. He starts talking to Maggie about Barnabas, and pulls a knife out on her, demanding to know if Barnabas is going to leave the Leviathans or not. Maggie says she knows nothing, but Bruno doesn't believe her and plans to kill her, since he learned nothing to tell Jeb.

David arrives at the antique shop to ask about Maggie's whereabouts, but Jeb denies knowing anything. He informs Jeb he has been reading the Leviathan Book in regards to Jeb's weakness, and tells him to beware of the "wolf who walks like a man." Jeb appears very concerned about what David has learned. David says he hasn't told Barnabas about what he has found out, and Jeb insists they must watch his every move. Bruno walks in moments later as David is leaving. Bruno tells Jeb that Maggie wouldn't give out any information, other than the fact she cares about Barnabas.

Later that night, Jeb arrives at the crypt and dismisses Davenport. He unveils the Leviathan Box to Maggie and tells her that he is "going to make everything alright." Jeb acknowledges that Maggie knows Jeb and Michael were the same person. He tells her she can soon return to Collinwood, but first she must open the Leviathan Box.

Bruno: You know, you ask too many questions. Did anyone ever tell you that, Maggie?

Maggie (to Bruno): Who are you? Are you dead too?

Michael Stroka bobbles the line, "Look, she’ll be susp– after I’m through with her, she’ll know that you’re suspicious of Barnabas!"

Dark Shadows - Episode 942 on the IMDb 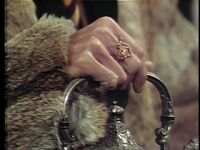 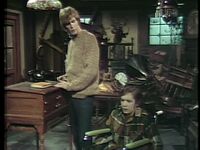 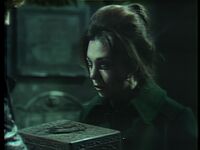 Leviathan Box
Add a photo to this gallery
Retrieved from "https://darkshadows.fandom.com/wiki/942?oldid=140418"
Community content is available under CC-BY-SA unless otherwise noted.