This will be a fateful day for one person who lives in the great house of Collinwood. Carolyn Stoddard still does not know that she is soon to become the victim of an evil plan. But Barnabas Collins is only too aware of the terrible fate that awaits her. And now he has embarked on a desperate plan of his own: to save her from the man who threatens her life.

The poison has no effect on Jeb. Jeb suspects Barnabas put something in his drink, but he denies it. Jeb brushes the matter aside, and tells Barnabas how the wedding will take place. He plans to meet Barnabas and Carolyn at the Old House at 8pm.

Julia and Quentin are talking at the Old House. She is telling him everything that Barnabas told her about the Leviathans. Barnabas returns and tells Julia his plan to kill Jeb has failed. The three ponder where they can hide Carolyn to prevent the wedding. Barnabas asks Julia where he can find Angelique.

Barnabas shows up at Angelique's place.

Angelique is shocked to see Barnabas and demands that he leave before Sky returns. Barnabas asks if she can hide Carolyn at her house for a few days, but she refuses, and believes Carolyn would recognize her as Cassandra. Angelique wants nothing to do with the situation until Barnabas mentions she is in danger from the Leviathans, which immediately gets her attention.

Quentin shows up at Collinwood and starts talking to Carolyn. He reveals that he has regained his memory, and identifies himself as the great-grandson of the Quentin Collins who lived at Collinwood in 1897. Carolyn is shocked and slightly disturbed at this news, and wonders how he didn't remember he was a Collins before. Quentin claims he is a writer, and used the name "Grant Douglas" as a fake name. Jeb then walks in on them, and makes sure Carolyn is still on for their "date" later on in the evening. Quentin and Jeb meet, and there is clear animosity between the two.

Barnabas finally gets Angelique to help him in his battle against the Leviathans. But she reveals to Barnabas that she still has all of her powers, and if he ruins her happiness, she will never forgive him.

At night, Barnabas, Julia, and Quentin have a plan in place to disrupt the wedding between Jeb and Carolyn. Julia searches Collinwood, but Carolyn is already gone. Jeb, from the antique shop, calls Collinwood and asks for Barnabas. He tells her that he moved up the start of the date to 7pm, and he no longer needs Barnabas to help him.

At the antique shop, Carolyn is still uncomfortable around Jeb. He breaks a figurine, and then has Carolyn do the same, so she can feel "liberated". The two then share a drink, but Jeb has drugged Carolyn's drink, and she blacks out. Jeb picks her up and starts to carry her upstairs to the Chosen Room, saying "this is the beginning of your new life."

Angelique: Barnabas, remember this, and remember it well: I still have all of my powers. If because of you, and because of this favor I'm doing for you, if my happiness is ruined, I will never forgive you. Never.

Barnabas: But you can't proceed with this without my help.
Jeb: Well, that's what the book says...and I've decided the book is as obsolete as you are.

Dark Shadows - Episode 940 on the IMDb

Dark Shadows Everyday - Episode 940 - Those Whom the Gods Would Destroy, They First Give an Ascot 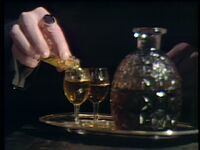 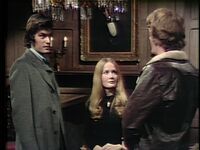 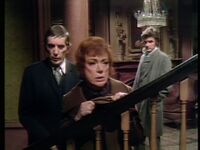 Barnabas, Julia & Quentin
Add a photo to this gallery
Retrieved from "https://darkshadows.fandom.com/wiki/940?oldid=140383"
Community content is available under CC-BY-SA unless otherwise noted.