Jeb raises Sheriff Davenport from the dead as a servant; Barnabas pretends to cooperate with Jeb.

On this night, as darkness hangs like the cloak of death over the great house at Collinwood, Barnabas Collins has last told Julia Hoffman the nature of the evil which threatens everyone at Collinwood. During the past 48 hours, two people have died at the hands of this evil. Julia and Barnabas feel instinctively that something even more hideous than death is going to happen before this night is over.

At the graveyard, a hand rises out of Sheriff Davenport's grave.

Sheriff Davenport rises as a zombie and leaves the graveyard.

Maggie tries to help Carolyn cope with Paul's death and move on. Carolyn tells her she plans on returning to work at the antique shop, which worries Maggie. Maggie doesn't think it's a good idea, which upsets Carolyn, because she knows Julia feels the same way.

Meanwhile, Davenport enters the terrace at Collinwood. He hears a door open, and leaves. Carolyn enters the terrace, and soon hears someone approaching. It's Jeb. Carolyn tells him she isn't in the mood for visitors, but she finally agrees to let him stay anyways. The two then begin talking about the prospect of fate, since Jeb feels it was fate that led Carolyn to the antique shop earlier in the day. Carolyn isn't so sure, but Jeb says tomorrow will be fate as well. When she asks why, Jeb tells her it's because they are going to be married.

Carolyn is completely baffled with Jeb's plans and becomes very upset. She kicks Jeb out of Collinwood, but Davenport is still hiding in the terrace. Carolyn goes back into the house, visibly troubled. She rejects Maggie's help and goes to her room. Barnabas arrives shortly thereafter and asks if he saw anyone around the estate, but he says he did not. He reminds Maggie again to continue to keep a close eye on Carolyn, but doesn't say why.

Jeb returns to the antique shop with Davenport. Jeb tells him he brought him back to serve him, and that he is the first of a new army he is building.

The next morning, Carolyn wakes up to flowers and a message from Jeb, apologizing for his behavior the previous night, and asks to meet her later that night. Barnabas arrives and notices the flowers. Carolyn tells him they are from Jeb, which concerns Barnabas. Barnabas decides to himself he must kill Jeb immediately.

Later that afternoon, Barnabas arrives at the antique shop to see Jeb. He tells Jeb they need to start coming to agreements so they do not lose their mutual goal. Jeb seems happy with Barnabas's new found attitude, and agrees to have a drink with Barnabas. Barnabas goes to prepare the drinks, and slips a few drops of poison in Jeb's drink. They both make a toast for Carolyn, and take their drinks.

Carolyn (regarding Paul Stoddard): Whatever his mental state, I was happy to have him here, happy to be with him, and I will find out who or what caused his death. Somehow I will.

Carolyn: You have decided that I'm going to marry you. The fact that you and I don't even know one another is an obstacle you can apparently overcome with ease. I'm a bit more complex. I'm not upset, Mr. Hawkes. I'm appalled.

Jeb (to Barnabas): I accept any offer...of obedience.

Dark Shadows - Episode 939 on the IMDb 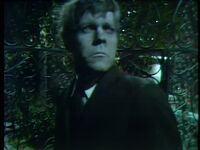 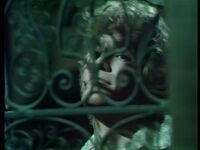 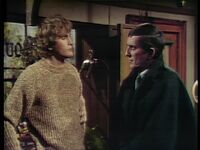 Jeb & Barnabas
Add a photo to this gallery
Retrieved from "https://darkshadows.fandom.com/wiki/939?oldid=140313"
Community content is available under CC-BY-SA unless otherwise noted.