Barnabas relates to Julia how he came under the influence of the Leviathans.

This will be an eventful night at Collinwood. For Julia Hoffman has learned more about the menace that threatens the Collins family. And on this night, she will finally find out the secret of what happened in the year 1897, and how Barnabas Collins become the unwilling pawn of a mysterious and evil people.

Julia finds Barnabas at Collinwood and informs him she had Michael's grave dug up and found the coffin empty. Barnabas finally agrees to tell Julia everything she wants to know about the Leviathans.

Barnabas and Julia meet at the Old House. To begin his story, Barnabas recalls the final night he was in 1897, when Tate's studio was destroyed in the fire, and Quentin's portrait was at that point believed to have been destroyed in the fire. Tate agreed to paint another portrait of Quentin, but never did. Julia admits to Barnabas that she had found Tate a couple of weeks ago, but was killed by Chris (as a werewolf) when the portrait of Chris didn't work. She then tells him that Barnabas was wrong about Quentin's portrait being destroyed in the fire, which surprises Barnabas. Julia informs him that Angelique had it originally, but now it is in her possession.

Julia tells Barnabas that Angelique is happily married, has given up her powers, and wants nothing more to do with the Collins family. Barnanas then recalls meeting Kitty at the Old House in Josette's room. Together they faded into the portrait and into another time.

To end his story, Barnabas tells Julia how he was transported to 1797 and was captured by the Leviathans. Once he is finished, he tells Julia everything that has been happening since he returned from the past: Joseph, Alex, Michael, and Jeb are all the same person; the Todd's raised the Leviathan creature in the upstairs room of the antique shop; the Leviathans have threatened to turn Barnabas back into a vampire and are holding Josette hostage; Elizabeth, David, and Amy are all Leviathans; Jeb killed Paul and Sheriff Davenport; Carolyn is in imminent danger, as is Maggie, Roger, and Julia. Barnabas also reveals one other piece of information: Jeb can raise people he killed from the dead.

Meanwhile, at the graveyard, a hand is rises out of Sheriff Davenport's grave.

Julia: Barnabas, I know so much about your secret now that you'd better tell me everything.

Charles: I don't know, and you don't know, none of us knows, and we probably never will know. And besides, I don't care.

Barnabas: There was no way to hold Kitty back, Julia, the power of the portrait was too great... All I could do was hold onto Kitty, and follow wherever fate would lead us.

Barnabas: (about Jeb) He already has plans to do away with you and Maggie and Amy. He can create an army of the dead. 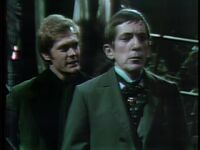 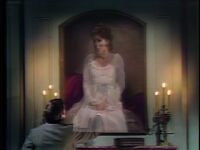 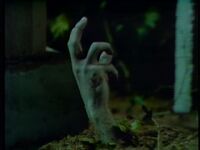 Undead Davenport
Add a photo to this gallery
Retrieved from "https://darkshadows.fandom.com/wiki/938?oldid=123836"
Community content is available under CC-BY-SA unless otherwise noted.