Julia notices the birthmark on Jeb which was the same as the children who previously lived at the antique shop, prompting her and Quentin to dig up Michael's grave.

A time of great anguish for those who live at Collinwood, for the horror which is enveloping the great house continues to grow. And with the advent of Jeb Hawkes, it promises never to stop. And Barnabas Collins, forced to become a Leviathan to save his Josette held hostage in the past, tries desperately to control the evil Jeb. Fighting for time until he can destroy those who threaten him and his world. But summoned to the village, Barnabas discovers that he has less time than the thinks.

Jeb informs Barnabas he plans to marry Carolyn by the end of the week.

David is now in a wheelchair, having broken his leg. He explains he was riding his bicycle and a man jumped out of the bushes and scared him. His description appears to similiar to what Jeb looks like, which leaves Julia suspicious. Julia feels he was probably going to the antique shop, which upsets David, and he leaves.

Barnabas is still arguing with Jeb about marrying Carolyn. Barnabas insists that the wedding must be postponed now that Paul is dead, but Jeb says that Barnabas can be the one to give Carolyn away. Jeb tells Barnabas the wedding will take place inside the Chosen Room, and then Barnabas will prepare rooms at Collinwood for them. Once the wedding is over, Roger will be made into a Leviathan, or else he will be killed. He also feels that Julia will need to be dealt with, as well as Maggie. Barnabas refuses to harm anyone at Collinwood, but Jeb again reminds him he will be turned into a vampire if he does not follow orders. Barnabas appears to agree with Jeb, and prepares to leave the shop. David then arrives in his wheelchair, and recognizes Jeb as the one who caused him to break his leg.

Later, David returns to his room at Collinwood, and finds Jeb waiting for him. David tells him he understands "why" he harmed him, and that he will follow all of Jeb's orders. Maggie walks in, surprised to see Jeb, and wants to know how he got into Collinwood.

Jeb tells Maggie he didn't want to disturb anyone, and let himself into the house because he felt bad about David's accident. Jeb gives David his watch in return for David giving him his two-way radio when he was Michael. She kicks Jeb out, but not before Julia sees him and notices the birthmark on his wrist. Maggie goes back upstairs and asks David what Jeb was really doing in the house, but David is evasive.

Julia calls Quentin and asks him to meet her at Collinwood. Once he arrives, Julia tells him it is time he helps Barnabas, since Barnabas helped him in the past. They first go to the graveyard and visit Michael's grave. Julia tells him that a key to helping Barnabas is to find out who Jeb Hawkes really is. Quentin begins digging up Michael's grave.

At Collinwood, Barnabas explains to Maggie how he found David at the antique shop. Maggie is confused as to why David is always going there, and she tells Barnabas she is very suspicious about Jeb. Barnabas claims that he doesn't know who Jeb is, but then tells her to keep an eye on Carolyn, as he doesn't think going there is a good idea for her.

In the graveyard, Quentin has finished digging up Michael's grave as Julia watches. He opens the coffin. Julia looks surprised, but her suspicions appear to be confirmed.

Julia returns to Collinwood and finds Barnabas. She tells him she just dug up Michael's grave and found the coffin empty. Julia then tells Barnabas she is "very involved" and demands to know what has been going on since Barnabas returned from the past. Barnabas finally agrees to tell her everything.

Barnabas: You would even kill one of us?
Jeb: Yes. I’m not sentimental, Mr. Collins. She (Amy) will have to go.

Dark Shadows - Episode 937 on the IMDb 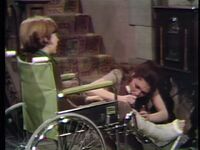 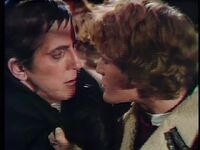 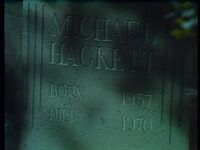 Past Life
Add a photo to this gallery
Retrieved from "https://darkshadows.fandom.com/wiki/937?oldid=140311"
Community content is available under CC-BY-SA unless otherwise noted.