Carolyn meets Jeb, who assures her he will help her forget her misery.

A night of decision at Collinwood. For Jeb Hawkes refuses to admit that his plans for Carolyn have been affected by the killing of Paul Stoddard, who sold her to the Leviathans, and was to give her to Jeb at the wedding ceremony. Now Barnabas, forced to become one of the cult because Josette is being held hostage in the past, and because they threaten him with the return of the curse of the vampire, has decided that whatever the risk, he must break with the cruel clan. He can no longer account for the raging savagery of Jeb, and so he goes to the police.

Jeb, who has just killed Sheriff Davenport, demands to know why Barnabas is also at the police station.

Barnabas tells Jeb he came to the police station to get Jeb away from anyone finding him, but Jeb doesn't buy it.

The next morning, Elizabeth is preparing for Paul's funeral. She wants Megan and Philip to attend the funeral, but Roger thinks it's a bad idea, as there is a lot of suspicion around his death. Carolyn and Roger both agree that Paul didn't exactly die of a heart attack, and Carolyn vows to get to the bottom of it. Elizabeth and Carolyn leave the room as Barnabas arrives. Barnabas informs Roger that Sheriff Davenport was murdered the same way Paul was.

Elizabeth, Roger, Barnabas, and Carolyn attend Paul's funeral (it is also implied that the Todds were also there). Carolyn says she should have listened to him and gotten out of Collinsport when he had the chance. Jeb watches Carolyn from a distance with a smile on his face.

Later that night, Jeb is at the antique shop and Barnabas shows up. He asks Jeb why he sent for him. Jeb tells him it's because no one at Collinwood knows he has arrived in town, and doesn't want to wait much longer to meet Carolyn. Barnabas doesn't want to introduce Jeb to Carolyn since she is upset over Paul's death, which was his fault. Barnabas tells him he will have to be patient. Once Barnabas leaves, he decides to himself that "Carolyn's time will never come."

At Collinwood, Barnabas explains to Carolyn and Elizabeth that Carolyn must leave Collinwood immediately. Elizabeth is surprised at this idea, but Carolyn doesn't want to think about going away, and leaves. Elizabeth says it's time to turn Carolyn into a Leviathan, but Barnabas says "her time" isn't coming "for months."

Carolyn goes to the antique shop, but Megan and Philip aren't there. Instead she meets Jeb, who appears to know quite a bit about her. Jeb tells her she needs to forget about her father, and he can help her forget. Carolyn seems to be fascinated by Jeb, but quickly leaves the shop.

Later, Barnabas and Jeb are talking about Carolyn at the antique shop. Barnabas tells Jeb he cannot turn Carolyn into a Leviathan. But Jeb has other plans, and tells Barnabas he is going to marry Carolyn on Friday.

Roger: I'm sorry, Elizabeth, but you know that Paul was a scoundrel. He was a worthless man. He caused this family nothing but trouble since he married you. Let's not let his death cause more problems. I think we should inquire into it privately but hush it up publicly. That's all I meant to say.
Carolyn: And you've said it brilliantly, Uncle Roger. All in the Collins tradition. There should be a motto on our family emblem: Hypocrisy above all!

Dark Shadows - Episode 936 on the IMDb 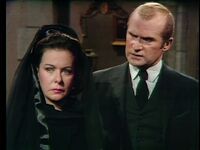 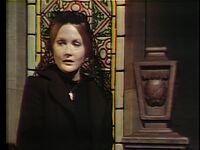 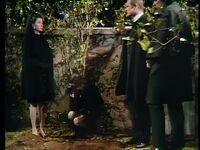