On this night, death hangs heavy over Collinwood. Paul Stoddard, who in the past sold his daughter Carolyn to an agent of the Leviathan cult for purposes as yet unknown, even to him, has been murdered by a relentless and unforgiving enemy. The same enemy who has threatened to return Barnabas Collins to being a creature of the night if he does not obey. But even in death, Stoddard has found allies and they have persisted in tracking down his killer. And the trail has led to a closed door in the Todd antique shop.

Sheriff Davenport shows up at the antique shop with a search warrant. He opens the door to the Chosen Room, and finds an adult in there.

The man identifies himself as Jeb Hawkes, who has recently moved to Collinsport and had the room rented to him by Megan. Jeb tells Julia that he is a photographer, but Julia is immediately suspicious. The two shake hands, and Julia notices he has the same birthmark as Michael, Alex, and Joseph had. After they leave, Jeb yells at Philip for making him "make all of the conversation" when Davenport was searching the antique shop. He calls Philip an idiot, but Philip says he wouldn't be an idiot if Jeb would tell him what his plans are. Jeb has no intentions of doing this, however, and tells Philip he will have to "sweat it out."

Outside the shop, Julia and Davenport both agree they aren't satisfied with what they found. Davenport recalls smelling the same scent that was on Paul's jacket when he was killed, and tells Julia he will continue the investigation.

Later that night, Barnabas enters the antique shop, asking to speak with Jeb alone. Barnabas is furious that he broke out of his room to kill Paul. Jeb says he needed Paul dead, but Barnabas says he needed him alive. Jeb asks Barnabas when he can see Carolyn. But Barnabas says according to the book, Carolyn (who was sold by Paul to become Jeb's bride) had to be given away by Paul at the wedding ceremony. Jeb informs Barnabas he doesn't care about the book, and only wants to see Carolyn.

Julia goes to visit Quentin. Quentin tells her that Amanda is gone, and all traces of Olivia Corey have disappeared. Julia deduces that history will now only say that Amanda died in 1897. Quentin is heartbroken, but Julia informs him that there is someone who needs his help.

Julia tells Quentin about Barnabas and his strange behavior since returning from the past. Quentin says he needs more time to recover from losing Amanda before he can do anything else.

Meanwhile, Davenport shows up at the antique shop, and tells Jeb he should get out of the antique shop and find new friends for his own good. The sheriff leaves, and Jeb tells Philip is going out, but doesn't say where.

At Collinwood, Julia informs Barnabas that the sheriff found a cuff-link from Paul's jacket near the basement door at the antique shop. She tries to get Barnabas to go to the police station and tell Davenport everything, which Barnabas appears tempted to do.

Later that night, Davenport is getting ready to leave his office for the night, but he hears the sound of breathing and is attacked by the Leviathan creature. Moments later, Barnabas shows up. He first sees Davenport dead, and then sees Jeb standing in the corner of the room. Jeb explains his reasons for being there, but demands to know why Barnabas is there.

Jeb: Hey, this is going to be a pretty exciting place!

Quentin: Everything has disappeared...except my love for her [Amanda]. Heh. I almost had her! Almost doesn't count, does it? [Laughs.] Tell me, Doctor. What does count in a long, unhappy life of Quentin Collins? Not much, huh? Not anymore.

Quentin (to Julia): You and your unholy belief in the Collins family!

Julia: Barnabas, I must be concerned with the people that I love...the people that are being hurt by what's happening. Carolyn for one...and yes, you, Barnabas.

Dark Shadows - Episode 935 on the IMDb 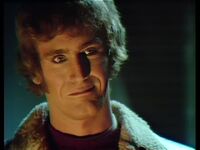 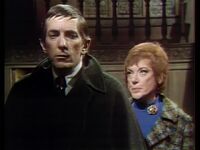 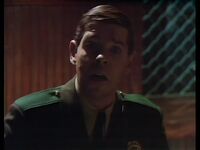