Darkness lies over Collinwood. For Paul Stoddard, the darkness is eternal, for he lies dead in Professor Stokes' flat. And for another member of the family, too, death tonight is the enemy. For Quentin Collins is trying to bring Amanda Harris back to the world of the living. On the journey they have faced many dangers, and overcome them without touching each other, the one forbidden act. Now, near the end of the journey, they must face the greatest danger of all.

Quentin successfully crosses the bridge. As Amanda is crossing it, one of the tiles disappears, causing her to fall.

Quentin rescues Amanda, but they are forced to touch. Quentin manages to escape, but Amanda is killed by falling rocks. Moments later, Quentin wakes up in the woods. He faintly hears Amanda's voice, but realizes he is all alone.

Sheriff Davenport is investing the incident at Stokes's house. Stokes feels they should tell the police about Barnabas, but Julia doesn't think they should. Instead, she feels the answer lies in the antique shop.

At the antique shop, Megan and Philip are waiting for the Leviathan creature to return. Philip is still very upset with Megan for letting the creature out, but Megan says Paul needed to be killed to protect the Leviathans. Philip thinks it's only a matter of time before the residents of Collinsport begin suspecting them, but Megan says everything will be alright. Soon after, the sound of breathing can be heard, meaning the creature has returned, much to Megan's delight.

Philip is still worried that someone may have followed the creature back to the antique shop.

Meanwhile, Julia and Stokes are discussing Paul's death. Julia gives Stokes a list of words that Paul said before he died, including "monster," "upstairs," "boarded room," and "always breathing." Julia reiterates her theory that there is suspicious activity going on at the antique shop, and the sheriff remembers how Megan called him earlier in the day regarding Paul's whereabouts. They decide to announce that Paul died of a heart attack.

Back at the antique shop, Megan follows Philip suggestion that they let the creature go for everyone's safety, but is unsuccessful. Philip finally says he is tired of dealing with the Leviathans, and plans to leave Collinsport immediately, with or without Megan. The phone then rings: it's Elizabeth who has confirmed that Paul is dead, and he said nothing before he died. Megan then tells Philip to calm down and stay, and all of the plans are going accordingly.

Megan decides to go to Collinwood, but has Philip stay at the antique shop. Philip still looks upset, but Megan told the creature "not to hurt you." Later that night, Philip has a hammer and is prepared to walk upstairs, but there is a knock on the door. Sheriff Davenport and Julia arrive with a search warrant, and tell Philip that Paul mentioned the shop in his dying words. Philip initially tries to get rid of them, saying he has been very sensitive lately because they had a child in the family die. Davenport insists the search won't take long, and Philip finally agrees to let him look around. They go upstairs, and much to Philip's dismay, Davenport opens the door to the Chosen Room.

Sheriff Davenport: I've never seen a room destroyed as horribly as that one was, or a corpse that looked like that. I haven't the faintest idea of who or what murdered him.

Philip (regarding the Leviathan creature, speaking ironically in terms of what he thinks Megan thinks of him): He's the one who's strong and resourceful and ruthless. Well, I'm none of those things. I'm just plain scared.

Sheriff Davenport: In my business, I go after killers, not monsters.

Dark Shadows - Episode 934 on the IMDb 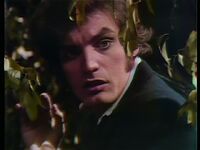 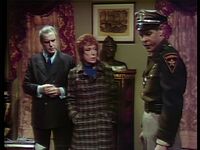 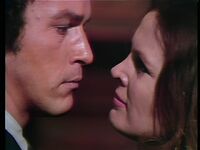 Leviathan Lovers
Add a photo to this gallery
Retrieved from "https://darkshadows.fandom.com/wiki/934?oldid=140286"
Community content is available under CC-BY-SA unless otherwise noted.