Quentin and Amanda attempt to escape by crossing a deadly bridge. Paul is attacked by the Leviathan creature.

A long time ago at Collinwood, Quentin Collins and Amanda Harris fell in love, then lost each other for more than a lifetime. Now they're finally to be re-united, in the domain of Death. But soon they will learn how fragile their moment of heaven is, for death is greedy and reluctant to let go of what is his. And he has told Quentin that Amanda will never be able to leave if they should touch before they escape his domain.

Quentin accepts Mr. Best's deal and he disappears. Amanda enters the room and reaches out to touch Quentin.

Quentin explains to Amanda how they cannot touch. She is frightened, but accepts the prospect anyways. Quentin then announces that it is time to begin their journey.

At the antique shop, Megan has just gotten off the phone with the police, asking to find out if they have found Paul anywhere. The police say they have not found or heard anything in relation to Paul. Philip thinks it was a stupid idea to call the police, for now they could be suspicious of them. Philip runs upstairs, while Megan thinks to herself that maybe Paul has either left Collinsport or is dead. Moments later, Philip yells down from upstairs, asking for Megan.

Stokes is still trying to help Paul, but Paul is in a state of shock and is unable to speak.

Back at the antique shop, Philip and Megan have discovered that the Leviathan creature has escaped.

Quentin and Amanda are making their way through Mr. Best's domain. Amanda drops her candle and gets caught in a large spider web.

Quentin throws a large rock at the spider and kills it so Amanda can escape.

Philip suggests asking Barnabas for help, but Megan doesn't want to, saying Barnabas can't be trusted anymore. Megan, seemingly taking control of the situation, says Philip will do nothing and she will attempt to resolve the matter.

Stokes continues his efforts to get Paul to speak. While Stokes is out of the room, Paul rushes to the phone and calls the police. Stokes quietly returns to the room and notices Paul is on the phone, realizing he can speak. Paul quickly runs out and locks himself in another room. Paul calls Julia for help.

Quentin and Amanda are at a bridge, with light on the other side. Amanda thinks it's a trap, and they shouldn't cross it. They decide to cross it one at a time. Quentin is the first to attempt.

Julia arrives at Stokes's house. She asks to see Paul, but Paul, frightened, tells them to leave him alone, and he will only talk to the police. Julia pretends to call the police in order to get Paul out, but moments later the sound of a loud breathing noise is heard and Paul screams. He escapes back into the main room, covered in some sort of substance.

Quentin has made it to the other side of the bridge, but Amanda is still afraid to cross it. She finally decides to attempt it.

The Leviathan creature escapes from Stokes's house. Julia examines Paul after his latest attack, and pronounces him dead.

Amanda is almost across the bridge, but a final step on the bridge is now missing, and she falls.

Dark Shadows - Episode 933 on the IMDb 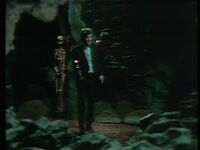 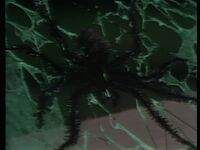 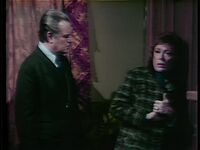