Quentin remembers who he is. Mr. Best will allow him and Amanda to be together under a certain condition.

A climatic night at the great estate of Collinwood. The night in which time is of greatest importance. To save Amanda Harris from her meeting with death, Grant Douglas must regain his memory. And so two women take him an odd professor's workshop, in a last, desperate effort to break through his amnesia.

Julia shows Grant the portrait of Quentin Collins, which now depicts a hideously disfigured face, which now betrays the truth that its subject's soul has become twisted and evil. Amanda screams and runs out of the room, but Grant appears to be very interested in it.

Grant tells Julia he still remembers nothing. Outside, Amanda wonders if she would look the same as Quentin's portrait does if it weren't for Mr. Best. After she calms down, she decides to go back in the house, but she is stopped by Mr. Best. Amanda insists she has five more minutes, and he agrees to let her go back inside to see if Grant's memory has returned. Inside, Grant looks at the portrait one more time, and recalls the day Tate created the portrait.

Quentin becomes angry as he continues to gaze upon his portrait, but is surprised that Julia can still stand to be in the same room as him. He rushes outside to find Amanda, but she and Mr. Best have already left.

Mr. Best returns Amanda to the "Stopping Off Place," indicating that she is in the first phase of death, and soon will "pass by." He leaves, and she unsuccessfully tries to find a way out.

Amanda, still trying to escape, is given a key by a bellhop, but it turns out to be a fake. The bellhop recalls the day Amanda was there over 70 years ago. Eventually, he insists upon escorting her to her room, but she breaks down in tears.

Quentin becomes distraught over losing Amanda, and insists Julia leave the suite. Afterwards, Quentin finds a knife and prepares to commit suicide, but Mr. Best shows up and stops him. Mr. Best tells Quentin it isn't his time to die. Quentin pleads with him to let him see Amanda.

Quentin and Mr. Best then travel to the "Stopping Off Place," but Amanda isn't there. Mr. Best shows Quentin a door, which is "the way out." Mr. Best, explaining that with courage the door may lead back to the outside world, then offers Quentin a deal: if he and Amanda can successfully navigate the traps on their way back to the outside world, and can refrain from touching each other, they will be together for eternity. But if one of them even accidentally touches the other, Amanda will die and be lost forever. Quentin accepts the challenge, and Mr. Best disappears. Soon after, Amanda enters the room, and in her excitement, reaches out to touch Quentin...

Mr. Best: You mustn't try to understand all I say. My mind is much more complex than yours, or anyone's, for that matter.

Mr. Best: Are you so afraid that you think even Death a good companion? I'm flattered. It's been so long since anyone begged me to stay.

Quentin: Yes, I may have forgotten my life...but that portrait hasn't. There I am as I truly am, Doctor...every slight, every act of cruelty I ever committed is written into that face...every cheat, every lie, every sin, every trick!

Dark Shadows - Episode 932 on the IMDb 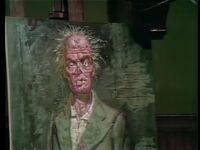 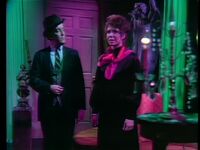 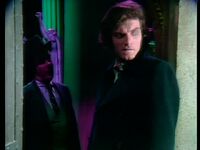 Best Challenge
Add a photo to this gallery
Retrieved from "https://darkshadows.fandom.com/wiki/932?oldid=140283"
Community content is available under CC-BY-SA unless otherwise noted.