A night of panic in the great house of Collinwood. For Barnabas Collins, especially. Forced to become a Leviathan because the cruel clan holds Josette hostage in the past, Barnabas has a new and frightening problem. Paul Stoddard has disappeared, run from the house searching for evidence of the mysterious plot he so fears. He goes to the antique shop, and there in an upstairs room, he discovers a secret that shocks him so much, he is easily captured. And now Paul, confined to a small, window-less room, suddenly smells the same heavy, strange odor he smelled in the room before, and he hears a sound. A sound which terrifies him.

Megan lets the Leviathan creature out of the Chosen Room. It heads towards the basement, where Paul is being kept.

Megan watches with glee as the creature prepares to attack Paul, but Barnabas shows up and saves him. He escorts the creature back to the Chosen Room. Barnabas scolds Megan for letting the creature out of its room. Megan denies everything at first, but Barnabas knows she is lying. He tells Megan she will do nothing until he has dealt with Paul.

Meanwhile, Paul escapes from the antique shop. Julia sees him outside, but he is unable to speak and appears to be in a state of total shock. Barnabas goes down to the basement, and notices Paul missing.

Julia takes Paul to see Stokes. Paul is still unable to speak. Stokes notices a strange smell on Paul. Julia notices a similarity in Paul's behavior to that of Amy's when she was frightened. She then remembers that Amy felt better after Barnabas talked to her, which raises Stokes's suspicions that Barnabas is behind everything, and it's time to be more realistic with him.

The phone rings at Stokes's house. It is one of his fellow professors, who says he is almost finished analyzing the Tate painting. Julia leaves his house to go get her medical bag. The wonder if they should trust Carolyn with Paul's whereabouts. Julia doesn't have a problem with it, but Stokes is skeptical.

At the antique shop, Megan is wondering where Paul is, and if she should continue to trust Barnabas. She picks up the phone and calls Collinwood. Amanda (posing as Olivia) answers the phone, and tells her that Elizabeth isn't there. Julia walks in after she gets off the phone. Amanda tells her that she only has 2 hours to live. Julia instructs her to go back to the hotel to try to get Grant to regain his memory, and she will be in touch with her shortly.

Amanda returns to her hotel room and continues her efforts to help Grant. She gets upset when he calls her "Olivia," and Grant recalls a time before when she told him they had met before. When he asks for an answer, she kisses him.

Grant admits to Amanda that he feels he used to love someone very much a long time ago, but he can't remember anything about it. The phone rings: it's Julia, who tells Amanda that the portrait of Quentin Collins is ready.

Julia, Grant, and Amanda arrive at the house where Quentin's portrait is being kept. Grant thinks the whole idea is stupid, but Julia and Amanda convince him to look at the portrait. Julia unveils it; Amanda screams and runs out of the house, while Grant gazes at it with great interest.

Grant: You know, everybody's always asking me questions. Everybody seems to forget that I am the original man without answers.

Grant: How does a man without a past know if he's in love or not?

Professor Stokes: I like to see the end of a story once I've begun it.

Grant: Sometimes I have a feeling I've lied to many beautiful women.

Grant (to Julia): I should be used to you dragging me into strange rooms by now. What is it this time, Doctor?

Dark Shadows - Episode 931 on the IMDb 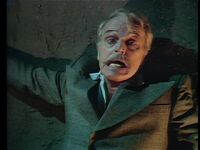 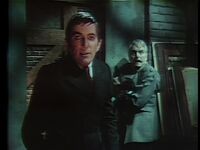 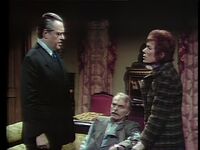 Comatose
Add a photo to this gallery
Retrieved from "https://darkshadows.fandom.com/wiki/931?oldid=143196"
Community content is available under CC-BY-SA unless otherwise noted.