At night, Megan lets the mysterious presence out of its room in the antique shop.

For many weeks, Barnabas Collins, faced with the threat again of becoming one of the living dead, has been forced to do things against his own will. But finally he decides that he must secretly fight back. On this night, he has arranged the escape of Paul Stoddard, who has been a virtual prisoner inside the great house. But Paul Stoddard also knows of the menace that threatens the family. And hoping to find proof of it, he has gone to a small antique shop in Collinsport, unaware of the terrifying nightmare that awaits him.

Paul hears breathing coming from the upstairs room at Collinsport. He unlocks the door, and screams at what he sees.

Paul is unable to escape the Chosen Room. Philip and Megan return to the antique shop, and realize that someone has been in the shop. Philip goes upstairs and discovers Paul is in the Chosen Room. Megan comes upstairs and tries to get Paul out, but the Leviathan creature gets more upset as their attempts fail. They decide to leave Paul in the room, and go ask Barnabas for help.

At Collinwood, Julia asks Barnabas if he minds if she looks in on Paul Stoddard. Barnabas says he doesn't care either way. Julia again scolds Barnabas about how different he is since he returned from the past. Barnabas contemplates telling Julia everything, but then realizes that she would become too involved if she knew about the Leviathans. He only tells Julia to look after Carolyn, which comes as a surprise to Julia. She asks if she is in any danger, but before Barnabas can answer, the phone rings. It's Megan, who tells Barnabas that Paul is trapped in the Chosen Room. Barnabas quickly leaves. Carolyn then walks in, and tells Julia that Paul is missing. They head out to search for him.

Barnabas arrives at the antique shop. After subduing the Leviathan creature, he is able to get Paul out of the Chosen Room. Paul is taken to the basement of the antique shop and placed on a bed. While deciding what to do next, the bell sounds from upstairs: someone is in the antique shop. Megan and Philip rush upstairs. It's Julia and Carolyn, who are looking for Paul. They say they searched the Blue Whale and the Inn, but have seen no sign of him. While they are talking, a crash is heard from downstairs (Barnabas was struggling to keep Paul on his bed). Julia asks Megan and Philip if anyone else is in the shop.

Philip says there is no one else in the store, but Megan has him go check downstairs anyways. Downstairs, Barnabas again tells Paul he will try to help Paul escape (which Philip overhears), but he needs more time. Philip tells Barnabas that Julia and Carolyn are at the shop. Barnabas tells him to get rid of them. Philip goes back upstairs, and says a lamp fell over and crashed on the floor. Julia and Carolyn leave the shop, but Julia stays behind to see if anything suspicious is going on.

Back in the shop, Megan tells Barnabas that Paul needs to become a Leviathan or be killed. Barnabas gets upset with her, and says there must be no more killing. Megan asks him if Barnabas is feeling alright. Barnabas says he is merely upset. He then orders Megan and Philip to keep the Chosen Room locked until he returns tomorrow. Moments later, Julia sees Barnabas leaving the antique shop.

Megan and Philip are upstairs. Megan wants to open the door to the Chosen Room, since the breathing noise has stopped, but Philip insists they keep it closed. Megan then talks about Barnabas's strange behavior recently, but Philip dismisses it.

Later that night, Megan sneaks out of her room while Philip is sleeping and lets the Leviathan creature out of the Chosen Room. The creature walks downstairs and approaches the door to the basement, where Paul is being kept.

Julia: Barnabas, you're so totally different now. What happened to you in the past? You used to be a man with feelings. You used to care about the people at Collinwood.

Julia: Barnabas, we've been through so much together.

Barnabas (thinking): If I tell (Julia) her everything, then she will become too involved, and her own life will be in even greater danger! I’ve already caused enough harm. I must work this out alone!

Dark Shadows - Episode 930 on the IMDb 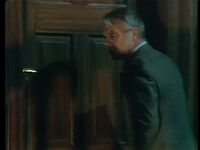 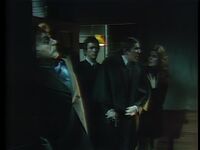 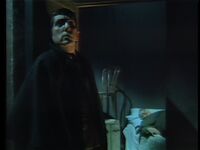 Barnabas Panics
Add a photo to this gallery
Retrieved from "https://darkshadows.fandom.com/wiki/930?oldid=140276"
Community content is available under CC-BY-SA unless otherwise noted.