Since Barnabas Collins returned from the past, his actions have been a mystery and a matter of concern to many who have once been close to him. No one has known of the strange force that has compelled him to do the things he has done, the people of the Leviathans, who hold his beloved Josette hostage, and threaten him with the return of the curse of the vampire. He has become desperate to find a way of stopping the menace who threatens Collinwood. The menace that exists in an upstairs room of the antique shop in Collinsport.

Megan and Philip are about to close the antique shop. They both hear someone coming down the stairs. It's Michael, who says, "I've decided not to go through with it."

Megan says it's too late to change his mind, and he has to go back to the Chosen Room. But Michael says he has made up his mind, and he wants to remain Michael for a very long time. Philip forcefully takes him back upstairs. The phone rings: It's Carolyn who invites Philip and Megan to Collinwood to get away from the antique shop for the night. Meanwhile, Philip locks Michael back inside the Chosen Room.

Paul is sneaking around Collinwood, and retrieves a gun from a cabinet in the drawing room. Carolyn walks in. Paul tells her he has been feeling better because he hasn't been taking the medicine that Elizabeth has been giving him (he says he's allergic to it). He tells Carolyn to start preparing his food and drink from now on, and he will only take it if she gives it to him.

Paul returns to his bedroom, and finds Barnabas waiting for him.

Paul points his gun at Barnabas and tells him to get out, but Barnabas says he now wants to help him. Paul doesn't believe him, but he gives him a large box containing clothes and money and tells him to leave Collinsport as soon as he can so nothing bad happens to him anymore. Paul tells Barnabas that he isn't leaving until he knows Carolyn is safe, but Barnabas convinces him she will be alright. Barnabas leaves, thinking Paul has agreed to his plans, but Paul doesn't intend to leave.

At the antique shop, Philip finishes putting a padlock on the door to the Chosen Room. Paul looks satisfied with his work, but Megan appears skeptical.

Back at Collinwood, Elizabeth tells Carolyn she believes that Paul hasn't been taking his medication. She asks Carolyn to do it, since she can get him to do "almost anything." Carolyn leaves just as Megan and Philip arrive at Collinwood. They tell Elizabeth they had a problem with Michael getting out of his room, but everything is fine now. Elizabeth says they should all have a drink to "celebrate their deception."

Carolyn enters Paul's room and notices he is all dressed up. Paul tells her he is feeling better and wants to get out of the house for "a few hours." Carolyn will let him leave as long as she can come with him, and they agree to go to the Blue Whale later that night. She leaves, and Barnabas re-enters. (He had been hiding behind the curtain.) He tells Paul he will join everyone in the drawing room and make sure the doors are closed, so Paul can escape Collinwood without anyone seeing him.

Barnabas joins Elizabeth, Megan, and Philip downstairs in the drawing room. Elizabeth tells everyone she is excited about her new life as a member of the Leviathans, but she is worried about Carolyn, and feels that Carolyn should join them. This seems to worry Barnabas and the others, but Barnabas assures her he will take care of Carolyn. Meanwhile, Paul is on his way out of the house, and he steals the keys to the antique shop out of Megan's purse.

Paul arrives at the antique shop. While upstairs, he hears the sound of breathing coming from the Chosen Room. He unlocks the door and screams at what he sees.

Megan: You didn't do anything to him [Michael], did you?
Philip: I should think you'd be more concerned if he did anything to me.

Dark Shadows - Episode 929 on the IMDb 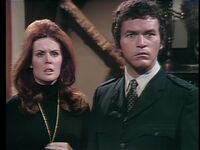 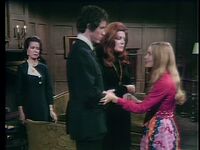 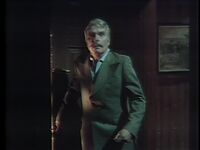 Leviathan Horror
Add a photo to this gallery
Retrieved from "https://darkshadows.fandom.com/wiki/929?oldid=140274"
Community content is available under CC-BY-SA unless otherwise noted.