Julia visits the woman who took care of Michael; Philip has bribed her to tell Julia a plausible story.

For Barnabas Collins, threatened with the return of the curse of the vampire, a time of terror continues. For Maggie Evans, a time of terror at Collinwood has ended, and the source of her torment has been identified as Michael, the boy who lives with Megan and Philip Todd at the antique shop. And now Michael faces his own time of terror. For with shocking swiftness, he has fallen ill, and as she examines him, Julia Hoffman knows his illness is grave indeed.

Julia prepares to give a suddenly-ill Michael a shot. Soon after, she decrees that the shot didn't work, and pronounces him dead.

Julia is preparing Michael's death certificate, and lists "heart failure" as the cause of death. Philip and Megan both feel they did a horrible job of taking care of Michael after "the accident," when he was heartbroken. The couple requests Julia that she lets everyone at Collinwood know what happened, but to not call or visit the antique shop for a few days.

Later, Megan and Philip are at a funeral parlor, looking at Michael's body. Megan asks Philip to leave her alone with him for a few minutes.

Julia arrives at Stokes's house, who now has possession of that Tate painting which has Quentin's portrait underneath. He tells her that he will soon have the painting removed, but Julia, who is preoccupied with Michael's death, doesn't seem that excited. She asks about a town 20 miles south of Collinsport, which is where Michael stayed when he was "younger." When Stokes leaves the room to get food, Julia sneaks out, hoping to get answers about Michael.

Julia goes to see a woman named Mrs. Hutchins, who Philip and Megan said took care of Michael before he came to Collinsport. She is very distraught over Michael's death, and tells Julia he was always a getting into mischief as a child. Julia thanks her for speaking to her, and leaves. Soon after, Philip emerges from another part of the house. He gives her an envelope full of money, and tells her she was "very convincing." Philip then orders Mrs. Hutchins, who apparently is an alcoholic, to forget ever meeting him, Julia, or knowing anything about Michael. She argues with him for a moment, but then agrees to forget everything. Philip leaves the house, but Julia sees him as she hides behind the bushes outside, and realizes everything Mrs. Hutchins said was a lie.

Philip returns to the antique shop, and informs Megan that Julia showed up to Mrs. Hutchins's house, and she believed everything.

Meanwhile, Julia returns to Stokes's house, who is upset that Julia walked out on him. Julia finally admits that she has been investigating the strange happenings at Collinwood and the antique shop ever since Barnabas returned from 1897, and feels there is an evil that will soon be affecting everyone. Stokes agrees to help, and asks Julia where to begin.

Stokes decides to go to the antique shop to see if he can find anything out. While there, he notices Megan and Philip are both wearing jewelry featuring the sign of the Naga on them, and appears to recognize the symbol. He purchases an antique and then leaves. Philip and Megan both recognize Stokes as a potential threat to their plans.

While closing down the shop, Megan and Philip hear someone walking down the stairs. It's Michael, returned from the dead, who says he "decided not to go through with it."

Michael: I've decided not to go through with it.

Professor Stokes: I suppose I'd better pay a visit on the antique shop which specializes in a succession of strange, disposable little boys.

Dark Shadows - Episode 928 on the IMDb

Dark Shadows Everyday - Episode 928 - Another Day in the Uncanny Valley 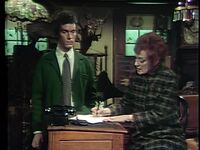 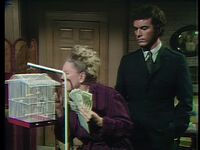 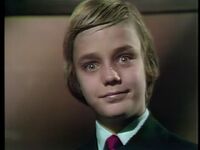 Change of Mind
Add a photo to this gallery
Retrieved from "https://darkshadows.fandom.com/wiki/928?oldid=143860"
Community content is available under CC-BY-SA unless otherwise noted.