In a hidden maze beneath the great house, a young woman has learned the meaning of fear, the same fear that has forced Barnabas Collins into a life of terror. Locked in a sealed room, Maggie Evans knows that she has a tormenter, who has led her through a terror-filled chase through the darkened secret passageways at Collinwood. Although she has no certain idea of who he is, she does know with fearful certainty that he is far from finished with her.

Maggie, trapped in the secret passageways at Collinwood, prepares to attack whomever is approaching the room she is in. However, she does not know it's Philip, who is only trying to help her escape.

Maggie attacks Philip and knocks him unconscious. She immediately regrets what she has just done.

Julia is reading in the drawing room at Collinwood and hears someone coming through the secret panel. Michael steps out, which draws immediate suspicion from Julia. She asks him if he knows about the secret panel in Maggie's room, but before he can answer, Maggie comes rushing in, in tears. Michael looks terrified at the sight of Maggie, and quickly runs out of the room before Julia notices. Maggie mistakenly tells Julia that it was Philip who was tormenting her and she thinks she killed him. Julia has Maggie take her to the secret passageway, as Michael looks on from a distance, with a look of satisfaction on his face.

Michael returns to the antique shop, and is upset at Megan since she did not kill Philip like he had asked. Megan explains that Michael is very dear to her, but she has been in love with Philip for a long time. But Michael says they won't have to worry about Philip anymore, as he is now dead.

Back at the antique shop, Michael is cleaning up when someone enters the shop and puts his hand on him. It's Philip, and Michael looks horrified to see him. As Philip is about to discipline him, Megan walks in, appearing much more relaxed and showing compassion towards Michael, but none towards Philip. She sends him upstairs. Megan continues to have random mood swings, wondering what their lives have become one minute, and then saying they must devote their lives to the Leviathans the next. Megan tells Philip not to worry about Michael; she will take care of him "the Leviathan way."

Megan goes upstairs to the Chosen Room to talk with Michael. She says she doesn't care about what he did to Maggie, but she does care that people are starting to ask a lot of questions about him. Michael says he likes it when people ask questions about him, but Megan thinks it's too dangerous. Megan tells him he needs to be careful because "something is going to happen soon," which sends Michael in a panic. Megan is also worried, because it will "make her very lonely."

Maggie shows up at the antique shop to see Philip. They both apologize to each other, and Philip explains that Michael is merely a troubled boy "since his parents were killed."

In the Chosen Room, Megan reluctantly tells Michael that it is time to send him into the darkness so he can emerge again. Michael tries to talk Megan out of it, and says that he loves her. But Megan tells Michael that one day he will love Carolyn, which gets Michael excited. Megan announces that "the time has come, and it must be done."

Later that evening, Megan comes rushing downstairs in a panic, telling Philip that Michael has become seriously ill. She calls Julia, who comes to the antique shop to examine him. Michael has an irregular heartbeat, and all of his vital signs are very weak. Julia arranges to have Michael taken to the hospital. Moments later, Michael loses his pulse, and Julia prepares to give him a shot.

Megan: The time of the Leviathan people is growing close.

Michael (to Megan, regarding Philip): Reasons don't matter. What does matter is what I want...and I wanted him dead!

Megan (regarding Michael): A little while ago, he was lying in a cradle. And in a little while longer, he'll know what to do with his skill and cunning and energy.

Dark Shadows - Episode 927 on the IMDb 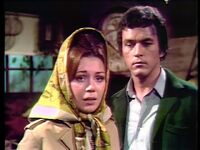 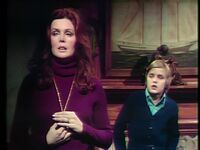 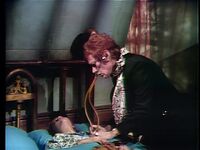 Leviathan Child Expires
Add a photo to this gallery
Retrieved from "https://darkshadows.fandom.com/wiki/927?oldid=140262"
Community content is available under CC-BY-SA unless otherwise noted.