For some time, Barnabas Collins has known that he has not been himself. Now, on this day, he will come to understand the full debt of the evil forces that have possessed him. But during the night that has just passed, Maggie Evans was lured from her room by a strange, unnatural sound, and soon found herself trapped in the secret passageways at Collinwood. Her disappearance has caused great concern, not only at Collinwood, but at the antique shop in the village. There, Philip Todd has blamed his young child Michael for being responsible for Maggie's disappearance.

Michael tells Megan that Philip has to be dealt with. He leaves the antique shop, and Megan gets a pistol from her desk.

Barnabas stops Megan from killing Philip. He sends Megan away and says they will talk later. Philip informs Barnabas that Maggie has disappeared, and believes Michael may be behind it.

Meanwhile, Michael returns to Collinwood. He says he forgot a book upstairs, and was coming back to get it. David confronts Michael about Maggie's whereabouts, but he continues to say he knows nothing, and walks out on him.

Maggie is still trapped in a strange room within the secret passageways of Collinwood. She hears the breathing sound from outside the door, gradually getting louder.

At the antique shop, Barnabas decides that Michael must be confined to the Chosen Room until it is time for him to emerge again. He tells Philip to go find Michael and bring him back to the shop. Once he leaves, Barnabas thinks to himself that he doesn't want to be under the control of the Leviathans anymore, but doesn't know how to escape their power. Megan comes downstairs to talk to Barnabas. He tells her she needs to have better control over Michael, and she needs to obey him before Michael.

In the room that Maggie is trapped in, she hears Michael's voice; he tells her that she will see him soon.

Philip shows up at Collinwood, looking for Michael. David says he hasn't seen him, but Philip doesn't believe him and demands to know what is going on with Maggie. Philip has David take him to Maggie's room, where Philip finally tells him that Michael never returned to the antique shop the previous night. He asks David if there is another way out of Maggie's room, and David reluctantly shows him the secret panel.

Philip enters the secret passageway, as Michael watches him from a darkened corner. Maggie soon hears footsteps outside the door. She picks up a candlestick and prepares to attack if anyone enters the room. Philip, after momentarily getting lost, finally approaches the door and asks if she is in there. He opens the door as Maggie raises the candlestick.

Michael: You don’t have to be afraid, Maggie.
Maggie: Michael, is that you?
Michael: Soon, very soon, I’m coming in, Maggie.

Dark Shadows - Episode 926 on the IMDb

Dark Shadows Everyday - Episode 926 - The Shark, and How to Jump It 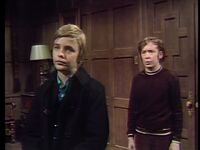 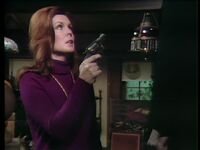 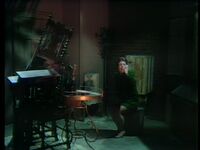 Maggie Confined
Add a photo to this gallery
Retrieved from "https://darkshadows.fandom.com/wiki/926?oldid=140260"
Community content is available under CC-BY-SA unless otherwise noted.