Maggie is led into the secret passages of Collinwood; Megan takes Michael's side against her husband, Philip.

There is a fear within the great house at Collinwood that everyone here is threatened by an evil as yet unseen. An evil that has something to do with Barnabas Collins, an antique shop, and those who live there. And on this night, alone in the house with two children, Maggie Evans will realize there is reason to fear, for her own life is in danger.

While in her room at Collinwood, Maggie hears the sound of breathing coming from the secret panel. She enters the passageway, and the door closes behind her.

Maggie is trapped in a secret passageway, but is determined to find a way out.

Megan is closing the antique shop. Philip walks in, and Megan is upset with him because he was supposed to be home over two hours ago. Philip tells her that he has been out thinking about how they have changed, and where their lives are going. Megan says they have no choice but to follow the Leviathans, but Philip wonders why they can't have a choice in their own lives. They decide to head to bed, but Philip becomes upset when Megan tells him that Michael is staying at Collinwood for the night. He accuses Megan of letting Michael run her life. She momentarily goes into a trance, and says he had better obey Michael, or else. Philip says he wishes he had never seen the Leviathan Box. Megan tells him he better not think like that.

Meanwhile, Maggie is still lost in the passageway at Collinwood.

David and Michael are playing a game in the drawing room as Roger walks in. He meets Michael for the first time, and then heads upstairs. Michael wonders why David never told him that Roger hated Alexander. David denies this, but Michael gets upset and rushes out of the room.

Upstairs, Roger enters Maggie's room and finds her missing. Meanwhile, Maggie becomes trapped in a room, and continues to hear the sound of breathing getting louder and louder.

In the drawing room, Roger suspects David and Michael to have something to do with Maggie's disappearance. Roger again leaves to go search for her, and Michael says he doesn't have any idea where Maggie might be.

Later that night, Roger returns from searching the house, unable to find Maggie. Philip arrives at Collinwood to pick up Michael. Roger informs him that Maggie is missing, and Philip suspects Michael is behind her disappearance.

Philip drags Michael back to the antique shop, and accuses him of knowing where Maggie is. Michael denies everything, and Philip forcefully tries to get answers out of him. Megan says if Philip lays a hand on Michael, he will be sorry. Philip gets frustrated and leaves the room. Michael feels that since Philip seems to hate him, he feels that all of their plans will fail. He explains to Megan that Philip shouldn't be "one of them" anymore, and Megan agrees that Philip will have to be dealt with. Michael leaves the antique shop, and Megan pulls a pistol out of her desk.

Michael: It doesn’t matter what game we play, David. You know that.

Michael: Who said anything about hurting (Maggie) her? As soon as it gets dark, we’ve just got a nice new game to play, that’s all.

Dark Shadows - Episode 925 on the IMDb 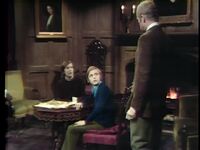 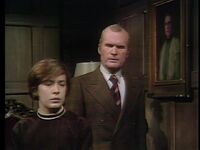 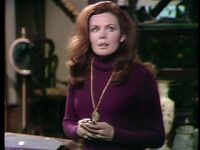