Angelique assures Julia she is happily married and has given up witchcraft.

A strange day at the great estate of Collinwood. A day of discovery for one woman who has journeyed to a house on a remote island, seeking the owner of Quentin's portrait, which is now covered by another painting. But while she waits for the woman who owns it, she makes an astounding and unexpected discovery.

While at Sky's house inquiring about a painting that might actually be the portrait of Quentin Collins, Julia learns that his wife is Angelique.

Sky explains that he has been married to Angelique for about 6 months, and it was basically "love at first sight." Sky tells her that she will arrive in about 20 minutes to discuss the painting.

At Collinwood, David is unsuccessfully trying to do homework and starting to come down with a cold. He wants to go to the antique shop to play with Michael, but Maggie refuses to let him leave the house. Moments later, Michael walks in, and Maggie agrees to let him stay, despite her being uncomfortable with how he stares at her.

At Sky's house, Angelique agrees to meet with the person interested in her painting. She walks in and sees Julia, and is immediately shocked.

Angelique panics when she sees Julia and declares that she wants nothing to do with the Collins family. She tells Julia she has given up her powers and is now human. Julia asks why she has the portrait of Quentin Collins if she wants to rid herself of the past. Angelique explains that she was in Tate's studio the day he started painting over the portrait of Quentin, and that she has always been drawn to the painting. Decades later, Sky would give her the painting as a wedding present. Angelique begs Julia not to tell Barnabas she is still near Collinsport. She agrees, on the condition Angelique relinquish the painting, and even offers to have the painting transferred to another canvas. Angelique asks her why she wants it so badly, and Julia tells her that Quentin is back at Collinwood, but has lost his memory. The news startles Angelique, and she isn't sure if she should help Julia or not.

At Collinwood, David and Michael are playing a board game. David is upset because Michael is cheating, and is insisting he "has" to win. Maggie walks in, and is displeased with the homework David did earlier in the day. She wants to talk with David about it, but Michael refuses to allow it, and orders Maggie to leave. Maggie is surprised with Michael's attitude, and tells David he had better meet her in 5 minutes. After she leaves, Michael tells David he hates Maggie, and they are going to play a "game" with Maggie when it gets dark out.

Angelique agrees to lend Julia the painting for a short time. Julia understands that Angelique doesn't want to see her or anyone else from Collinwood; they shake hands, and Julia leaves.

At Collinwood, Michael turns off the fuse box as a storm approaches. He and David hide as Maggie walks upstairs, searching for David. While in one of the bedrooms, the door closes on its own, trapping her inside. David lets her out of the room, and tells Michael it's time for him to go home. Michael says he's ready to go home anyway, and calls Megan and Philip to collect him. Maggie tells David that Michael is no longer welcome at Collinwood, which upsets him, and he goes to his room. Maggie returns to her room, and hears the sound of breathing coming from behind the secret panel.

David: I know exactly what is and what isn't important.

Angelique: Barnabas always laughed at me when I spoke of being human.

David: How come I never get to do anything I want?

Michael: I know lots of games.

Angelique: The past means nothing to me now.
Julia: We became friends in the past. Please, let us be friends now.

Dark Shadows - Episode 924 on the IMDb 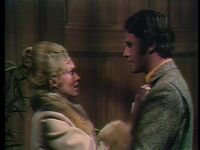 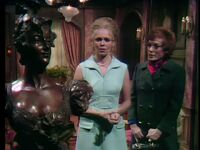 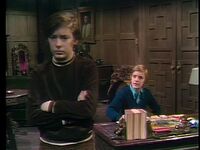 Playing Games
Add a photo to this gallery
Retrieved from "https://darkshadows.fandom.com/wiki/924?oldid=140256"
Community content is available under CC-BY-SA unless otherwise noted.