A full moon shines over Collinwood. A moon which has caused the wolf that looks like a man to kill an ancient painter. And his death has caused Olivia Corey to admit that she is actually Amanda Harris, kept young by a mysterious stranger, so that she could find her great love, Quentin Collins. But the stranger warned her that if she failed, the next time she saw him would be the day of her death.

Mr. Best shows up at Amanda's suite, and says he hopes she is "ready."

Mr. Best forcibly enters Amanda's suite. Amanda begs for more time, protesting that she has found Quentin, but he has lost his memory. Mr. Best insists it doesn't matter if he remembers her or not. Best already saved her earlier by driving the werewolf away. Amanda asks how much time she has left, and Mr. Best replies that she has only four minutes.

Julia, at Collinwood looking through family albums from the late 19th century, notices that every picture of Quentin Collins is missing. She decides she must find one in order to help Grant and Amanda.

Carolyn hears a knock on the door at Collinwood. It's Sabrina, who wants Carolyn to come with her, remarking on the full moon, and insists there is something Carolyn needs to see immediately.

Julia visits Amanda at her suite. Amanda reveals she has only seven days to stir Grant's memory. Julia vows to find the one thing that will help Grant remember who he is, and leaves.

Carolyn, following Sabrina to Tate's mansion, demands to know why she was brought there. Sabrina reveals that someone named Monroe was murdered in this room earlier in the night as the full moon was rising. Carolyn, still confused, is horrified to hear the sound of the werewolf's howl in the distance, and then the front door opens. Julia walks in. Carolyn is relieved to see her, but Sabrina, upset, yells, "She knows!" Julia slaps her to calm her down, and instructs Carolyn take her back to Collinwood.

Julia then searches Tate's mansion for clues about the whereabouts of Quentin's portrait, and finds a letter written by Tate (posing as Harrison Monroe) to an art museum inquiring about the location of a painting called "A View of South Wales." Julia deduces that Tate has likely painted over Quentin's portrait.

Carolyn attempts to calm Sabrina before doctors arrive and take her back to the hospital. They talk about Chris, and Sabrina confesses that she is in love with him, breaking down in tears.

Julia, back at Amanda's suite, discovers that the painting she believes is actually Quentin's portrait is in the possession of one Skylar Rumson, who lives about 50 miles from Collinsport. Amanda knows him; he is a famous publisher from New York.

The next day, Julia visits Sky, who shows her "A View of South Wales". Julia feels the painting looks to be about the same size as the portrait of Quentin. She asks to borrow it, but Sky tells her she would have to talk to his wife about it. Unfortunately she is not available, but Sky agrees to show her some other paintings. He shows her a portrait of his wife. Julia is shocked when she sees that his wife is Angelique!

Mr. Best: Hello, Amanda. Remember me? I hope you're ready.

Mr. Best: Why is no one ever willing to simply come with me?

Sky: That's her; that's my Angelique.

Sabrina: You love Chris?
Carolyn: No. I don't know that I ever had. I know now that I never will.

Dark Shadows - Episode 923 on the IMDb 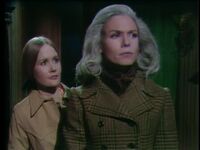 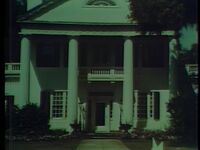 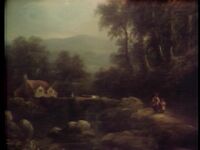 A View of South Wales
Community content is available under CC-BY-SA unless otherwise noted.
Advertisement