Olivia reveals to Julia that she's Amanda Harris, kept alive by a bargain with a strange man named Mr. Best.

Many things have changed since Barnabas Collins brought back the Leviathan box from the past, and many things are soon to change. But right now in an almost-deserted mansion not far from Collinwood, Charles Delaware Tate, a man who was part of that past, is locked in a room, and about to learn he has no future.

Chris transforms into a werewolf and attacks Tate, who is unable to escape. Grant arrives at the mansion and hears screaming coming from the inside.

Grant breaks into the mansion and finds Tate, who has been badly wounded. Chris, as a werewolf, attacks Grant, but Grant fends him off with a piece of silver, and the wolf flees. Tate, who addresses Grant as Quentin, asks him to save him, since Tate had saved him once before.

At Olivia's suite, Julia is confronting Olivia about the similarity of her writing sample to Amanda's. Olivia evades Julia's implication, explaining that it was Amanda who taught her how to write. Soon the phone rings. It is Grant, who asks to talk to Julia. He tells her that Tate has been injured, and she and Olivia leave to head to the mansion.

Julia examines Tate as Grant and Olivia wait outside. Julia asks him where Quentin's portrait is, but Tate again says the portrait was destroyed in a fire. Julia says she knows he is lying, and Tate agrees to tell her its location in exchange for keeping him alive. Olivia enters the room, and Tate recognizes her as Amanda.

Julia tells Olivia the man is Charles Delaware Tate. Oliva is visibly shocked. Julia again asks Tate where Quentin's portrait is, but he finally succumbs to his injuries and dies. Olivia seems to be taking Tate's death very hard, which sparks numerous questions and accusations from Julia. Olivia will admit only that her reaction was provoked by a fear of death.

Having run into the woods, Olivia encounters the werewolf and is about to be attacked. But the werewolf is distracted by something, and runs off.

Back at Olivia's suite, Grant recalls to Julia his experience with the werewolf from earlier in the evening. Julia senses that Grant intuitively knew that silver would be effective against the werewolf. Surprisingly, Grant agrees, and wonders what his intuition could mean.

Later that night, Olivia returns to her suite. Thinking she is alone, she pulls out the locket that Quentin gave to Amanda in 1897, and asks why Grant doesn't know who he is, and why he doesn't recognize her. Unbeknownst to her, Julia has been eavesdropping, and then confronts her. Olivia finally admits that she is in fact Amanda Harris.

In a flashback to 1897, Quentin and Amanda are arguing on a bridge in New York; Quentin tells her he can't be with her because he will always appear young, while she will continue to grow older. He gives her the locket, and bids to her move on with her life and forget about him. Quentin leaves, and Amanda is approached by a strange man named Mr. Best, who offers Amanda another chance to be with Quentin. But Amanda jumps off the bridge.

Amanda's suicide attempt fails, and she awakens in a hotel lobby that she has never seen before. Mr. Best appears, informing her she is at "The Stopping Off Place." He offers Amanda a deal: She will stay young for the rest of her natural life, and must find Quentin before the day she was meant to die. If she finds him and convinces him to stay with her, then they will be together for eternity. Mr. Best foretells that he will appear on the day that her natural life is to end.

Amanda then tells Julia that she woke up back on the bridge. Julia tells her she feels they are close to getting Grant to remember who he is, but that they need more "experiences" similar to the one that happened today in Tate's mansion.

After Julia leaves, there is a knock on Amanda's door. It's Mr. Best, and he asks Amanda if she is "ready."

Julia: You are Amanda Harris. First your handwriting showed it, and now your tears tell me.

Amanda (calling to Quentin): There is no life without you!

Mr. Best: Amanda, you're so beautiful. Many men will love you. If I were different, I'd love you myself.

Dark Shadows - Episode 922 on the IMDb

Dark Shadows Every Day - Episode 922 - To My Fans, the Audience 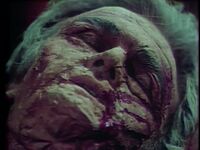 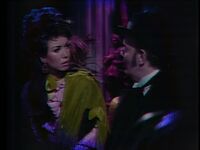 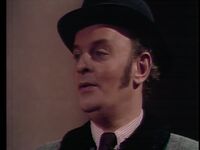