Chris forces Charles to paint his portrait in an effort to save him from the werewolf curse.

Not far from Collinwood, Chris Jennings and the man Julia believes to be Quentin Collins have found the recluse Charles Delaware Tate. The name of Quentin Collins has opened the door of Tate's home, and brought them face-to-face with a strange and incredibly youthful looking Charles Tate, who insists they keep their distance.

Tate appears to recognize Grant as Quentin, but becomes upset when he begins to talk about how Quentin stole Amanda Harris from him. Grant gets angry and throws a flower vase at him. Tate's head falls off on impact, revealing that whoever (or whatever) they were talking to is merely a dummy.

Grant runs out of the mansion, but Chris stays behind. He searches the mansion, and finds the real Tate, now an extremely old man, sobbing behind a curtain. Tate is upset that his "creation" has been destroyed and offers him money to leave and never return. Chris refuses, and tells Tate he is a werewolf and he needs to paint his portrait. Tate doesn't want to paint Chris's portrait, and says even if he did paint him, it wouldn't work the way it did for Quentin in 1897. Chris obtains the key to Tate's house and locks them both inside. Chris informs Tate there will be a full moon that night, and he had better start painting before it's too late.

Carolyn is working at the antique shop when someone puts their hands over her eyes. She thinks it's Alex, but is shocked to see Michael instead.

Michael lies to Carolyn as to why he is at the shop and Alex is no longer there. He appears to take an immediate liking to her, which seems to render her uncomfortable. While organizing a stack of magazines, Michael notices Megan's locket that has the sign of the Naga on it. He gives it to her as a present, but Carolyn says she knows it belongs to Megan. Philip walks down the stairs, and looks upset. Carolyn returns to her work, while Philip and Michael argue about who the locket belongs to.

Grant is wandering through the woods. He regrets to himself that he left Chris at Tate's mansion. He wonders to himself how Tate was able to recognize him, and who Amanda Harris might be.

At Tate's mansion, the painting of Chris's portrait has begun. After a while, Tate wants to rest, but Chris reminds him he has no time to spare.

Carolyn, Philip, and Michael are working at the antique shop. Carolyn grows increasingly uncomfortable with the fact that Michael won't stop staring at her. She decides she needs a break, and leaves to get coffee. Once she leaves, Philip lectures Michael about staring at Carolyn, saying he can't do it "yet." He tells Michael he needs to be patient. Michael counters back, saying Philip only talks to him that way because he's "bigger than he is," and he won't be small for very long.

Grant is still in the woods, looking very confused. He feels that something is drawing him back to Tate's mansion, and decides to head back to get Chris.

Outside the mansion, Grant approaches the front door and hears screaming coming from the inside.

Charles: No, Tate is gone. Years ago, he died, because I killed him when he got old and ugly. And I made a new Tate, a Tate that was young and handsome. And now he's gone too.

Carolyn (regarding the Naga locket Michael wants to give her): Carolyn would be just as happy with an ice cream soda. I'll even pay my own way.

Michael (to Philip): You only talk to me this way because I'm not as big as you are. Well, I won't be small always. Remember that...because I'm going to.

Dark Shadows - Episode 919 on the IMDb 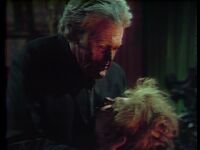 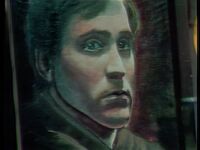 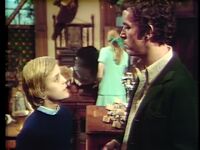