Grant and Chris go together to Charles Delaware Tate's house in an effort to learn some answers.

A night of the full moon has ended with the morning. And for Paul Stoddard, his hopes for escape have ended, too. Elizabeth has brought him back from the police station, secure that no one believed a word of his accusations. Now with Paul incapable of struggle, the members of Barnabas' cult must deal with still another member of the household, who is dangerous to them.

David meets with Elizabeth. He tells her that Barnabas is pleased with how she handled the Paul situation, but Julia must still be dealt with. Elizabeth says she is going to kill her.

Julia is frantically reading the papers to see if there were any mysterious deaths the previous night, but finds nothing. Meanwhile, Elizabeth is standing outside the room with a gun in her hand. Julia calls Olivia, who says Grant hasn't returned to the hotel yet. Elizabeth enters the room and tells Julia about what happened with Paul the previous night. While Julia has her back turned, Elizabeth pulls out her gun and prepares to shoot her, but she can't bring herself to do it and quickly puts the gun back in her bag, then leaves the room.

David is disappointed that Elizabeth couldn't kill Julia, and tells her to go read the Leviathan Book for guidance.

Chris rushes into the drawing room to see Julia, saying he "got tired of sitting in his cage at Windcliff." Julia tells him he needs to get back, as there is another full moon coming. Chris says he has other plans, which involve going to see Charles Tate. Julia says she isn't sure if Tate is the answer anymore, and first she needs to find Grant.

Meanwhile, Grant has returned to Olivia's suite. He looks disheveled and all of his clothes are torn up.

David and Elizabeth are reading the Leviathan Book. The book says they shouldn't kill Julia, as her spirit would be more dangerous than her living form.

Julia arrives at Olivia's suite and finds Grant. Grant says he was at the Hi Hat Lounge in Portland trying to find out more about his past, and he got into a fight at the bar. Grant says he asked questions about Frederick Thorn and was able to gain access into his locker that he had a key to. Inside the locker was an envelope with several letters, newspaper clippings, and a picture of Olivia Corey. Grant, who is still drunk, gets angry that Julia has no answers for him, and Julia ends up leaving.

Back at Collinwood, Julia calls the lounge in Portland and confirms that Grant was there the previous night, which helps her realize that Quentin's portrait still exists somewhere.

Chris goes to Olivia's suite to see Grant and asks him for his help. Grant mocks him, but hears him out anyways. Chris wants him to go visit Tate with him, as he could be the key to helping him regain his memory. Grant agrees to go with him, but admits he is starting to get tired of hearing the name "Quentin Collins."

At Collinwood, David and Elizabeth are staring at Barnabas's portrait. Elizabeth hopes Barnabas isn't upset with her. David says he will go talk to Barnabas to see what they must do next.

Chris and Grant arrive at Tate's house. They gain access with Grant saying "I am Quentin Collins." Tate appears to recognize Grant as Quentin, but becomes upset when he begins to talk about how Quentin stole Amanda Harris from him. Grant gets angry and throws a flower vase at him. Tate's head falls off on impact, revealing that whoever (or whatever) they were talking to is merely a dummy.

Grant: Mr. Jennings, do you know that I have had enough of Quentin Collins to last me for ten lifetimes?

Charles: There are ways of remaining young if one has true genius and one is a true artist.

Chris: I can no longer be a man and an animal!

Julia: You were at the High Hat Lounge in Portland last night?
Grant: Unless they moved it.

Dark Shadows - Episode 918 on the IMDb 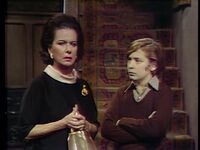 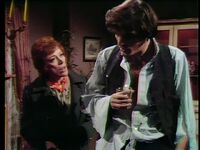 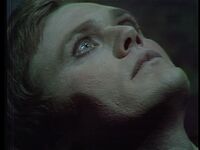