Hoping to restore his memory, Julia and Olivia go to Grant to show him Amanda's portrait.

Since the return of Barnabas Collins to the year 1969, one person more than any other at Collinwood has been troubled by the radical change in Barnabas. Little by little, Dr. Julia Hoffman has become convinced that the people of Collinwood are in grave danger.

In the drawing room at Collinwood, Julia explains to Elizabeth her belief that Michael, Alexander, and Joseph are one and the same.

Julia informs Elizabeth she is going to start investigating the activities at the antique shop. She asks to see Paul, but Elizabeth tells her that the family doctor is with him and he is under heavy sedation. Elizabeth says she is skeptical of Julia's plans, and tells her she had better be very careful.

Later at Collinwood, Chris comes to visit Julia. Julia tells him that she has come into contact with Tate, but he is mad and for some reason still appears as he did in 1897. Chris wants to go to his house immediately so he can paint his portrait, since there will be a full moon tonight, but Julia says it is too short notice to get everything prepared, and he will have to go through another transformation. However, Julia says she will plan to meet with Grant at dusk to see if he transforms, which will prove if Tate was right when he said Quentin's portrait was destroyed.

Elizabeth is at the Old House speaking to Barnabas about what Julia has told her. Barnabas says the only plan of action is that Julia "must become one of us." Elizabeth agrees, but then asks Barnabas what the true goal of the Leviathans is, and what Paul has to do with it. Barnabas only says that she will know when the time comes, but they will be "bestowing someone a great honor."

Barnabas goes to visit Julia at Collinwood. He asks her what her plans are for Chris, since a full moon is looming. Julia scolds him for trying to pretend to be interested in Chris, but eventually tells him Chris is at Windcliff for the night. She attempts to get rid of Barnabas, but he attempts to put her in a trance where he tells her she needs more rest, since she has been working very hard lately. He moves his hand over her face, and leaves the room. Once he is gone, Julia goes upstairs to her room to rest.

Grant is at Olivia's suite, heavily intoxicated. Olivia walks in, and wonders why Grant is in that condition. He finally admits that he feels different about his problem today compared to previous days, and he isn't sure why. Olivia tries to get him to go sleep, but Grant yells at her before he leaves, saying she wants to help herself, and not him.

That night, Julia has a dream where she hears Barnabas' voice tell her it's time for her to join the Leviathans. He appears to her in the drawing room at Collinwood, and beckons her to open the Leviathan Box. She manages to refrain from opening it, and runs off. Barnabas tells her it's too late, and the next time she sees the box, she will have no choice but to open it.

Julia heads to Olivia's suite with the portrait of Amanda Harris. She tells Olivia she knows she had her painting x-rayed because she is searching for Quentin's portrait. Olivia denies this, but Julia doesn't believe her. Julia asks to see Grant, but Olivia says that something has been bothering him today, and he drank quite a bit to forget about it. Julia thinks it's the perfect time to see him. Upon entering his room, however, Julia and Olivia discover it is in a shambles and Grant is gone.

Barnabas: You will believe, Julia! Someday soon, you will believe! Then you and I shall be close once more, as we were long ago. We need you, Julia — we need the resources of your mind! Come to us!

Barnabas: There are certain people whom we are unable to absorb. It has to do with their genetic structure; and Julia Hoffman is one of them.

Olivia: Why are you in my suite?
Grant (drunk): Because my room depresses me. It doesn't have a bar.

Dark Shadows - Episode 916 on the IMDb

Dark Shadows Everyday - Episode 916 - The One of Us 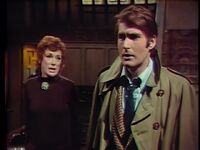 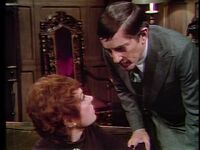 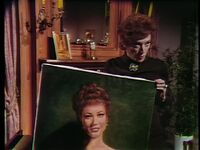