Barnabas is told that the Leviathans have Josette under their power.

Since his return from the past, Barnabas Collins has been possessed by the evil power of the Leviathans, and he has been unable to do anything but accept their commands unquestioningly. But on this day, a small boy in the antique shop will finally cause him to question. And the answer he will receive will shock and terrify him.

Barnabas meets with Michael at the antique shop. He tells him that Julia knows that he, Alex, and Joseph have the same birthmark, and orders Barnabas to kill Julia immediately.

Barnabas refuses to kill Julia, and tells Michael to drop the subject. He angrily leaves the antique shop.

At the Old House, Barnabas is performing a ritual over the Leviathan Box. He says he cannot follow the order of killing Julia, and he never will. Barnabas ends the ritual and sits down and falls asleep. In a dream, a member of the Leviathans appears to Barnabas and orders him to obey Michael's orders, or they will "force" him to obey the order.

The Leviathan goes on to explain to Barnabas that he is not a true Leviathan, but only a follower, and he needs to obey orders to prove himself. The Leviathan disappears, but Barnabas hears him in his head that they know what he once was. Barnabas is then tormented by several unseen forces, and hears the sound of a heartbeat. He is then attacked by a bat, and Barnabas wakes up. There is a knock on the door, and Megan arrives. As they are talking about Michael's request to kill Julia, Barnabas begins staring at Megan's neck, and forces her to leave. Once she is gone, he notices he has no reflection in the mirror, and his fangs have returned.

Barnabas finds himself in Collinsport near the docks. A woman, who introduces herself as Audrey, approaches him, and attempts to seduce him. He tries to get rid of her, but she refuses to leave him alone, and he ends up biting her.

Later, at the Old House, Barnabas is about to have another dream. In his dream Audrey, the woman he attacked at the docks, enters the Old House, now turned into a vampire. The Leviathan come with her, and tell Barnabas he has made her what she is. The Leviathan sends her back to the darkness, revealing to Barnabas that his dreams have all been "lessons" that he needs to realize. The Leviathan says Julia does not need to be killed, but Barnabas needs to consider his disobedience. Before the Leviathan leaves, he tells Barnabas that they are holding Josette hostage, and if he does not follow their orders from now on, Josette will die a very painful death.

Dark Shadows - Episode 915 on the IMDb 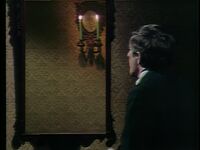 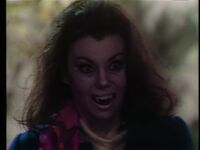 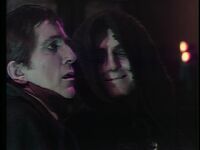