At the antique shop, the new Leviathan child terrifies David.

Somehow with the return of Barnabas Collins and the Leviathan box, the threat of an all-encompassing evil looms larger over the great house of Collinwood on this dark and sinister night. There are those who remain untouched by it as yet. One of them is Dr. Julia Hoffman. Even she is destined to be affected by it, but only after she recovers from the shock that awaits her at an old mansion not far from Collinsport.

Julia arrives at Harrison Monroe's house, saying she has a message from Charles Delaware Tate. The door slowly opens and she walks in.

Julia walks into the drawing room at the mansion and is instructed to sit down. A light turns on and she sees Harrison sitting at a table. He looks exactly like Charles Tate and still appears very young. At first, he denies ever living in 1897 and painting Quentin's portrait, but Julia calls his bluff. He says he "killed" Tate about ten years ago and re-branded himself as Harrison Monroe so people would leave him alone. Julia asks him if he can paint a portrait of Chris Jennings, but he says he has lost his ability to paint, and forces Julia to leave, but not before Julia says she will be back.

At Collinwood, Roger, David, and Elizabeth are in the drawing room. David is staring aimlessly out the window. Roger asks him what is wrong. David says he is fine, but Roger reveals that Maggie told him he has been acting differently lately. Elizabeth knows why David has been acting strange, but doesn't say anything.

In his room, David is reading the Leviathan Book. He returns to the drawing room, and tells Elizabeth they "have to go pay homage to him." They both leave the house, while Roger discovers David is missing from his room.

David and Elizabeth arrive at the antique shop and go upstairs to the Chosen Room, and the door opens.

An older boy emerges from the Chosen Room. He tells David and Elizabeth he is no longer to be called "Alexander," but will now be called "Michael." Elizabeth tells Michael he is always welcome to come to Collinwood for whatever he may need. Michael instructs Elizabeth that she will leave David at the antique shop.

Julia returns to Collinwood. Roger informs her that David is missing, and they both begin to search for him.

Elizabeth returns to Collinwood and tells Roger that David is spending the night in Collinsport with a friend.

Julia eavesdrops on Roger and Elizabeth as they argue about David. Elizabeth lies to Roger by telling him that Alex was leaving town tomorrow, and David wasn't sure if he would ever see him again. Roger is still disappointed, but eventually comes to terms with Elizabeth.

At the antique shop, David is tormented by many strange noises. He later hears a breathing noise coming from upstairs. The next morning, David tells Michael he has learned his lesson. Julia then arrives at the shop, and is surprised to learn that Alex is no longer there, and Michael will now be staying at the shop for the time being. Julia notices that Michael has the exact same birthmark that Alex and Joseph had. She quickly leaves the store, saying she will return when Carolyn is working. Once she is gone, Michael tells David he knows that Julia is suspecting something, and she must be dealt with immediately.

Roger: Is Alex the one who visited here last week?
Elizabeth: Yes.
Roger: An abominable boy.

Dark Shadows - Episode 913 on the IMDb 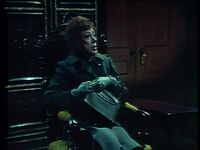 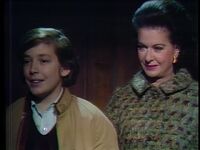 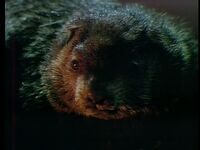