A gray, cloudy day at Collinwood. A house with many tragic memories, and a house marked for new tragedies. The wave of evil which is slowly encircling the great estate grows and grows. For in the neighboring village, a little girl running to escape a man she believes to be a ghost, makes a horrifying discovery.

While in the upstairs section of the antique shop, Amy enters the Chosen Room and screams.

Barnabas enters the antique shop, searching for Megan or Philip. Alex walks down the stairs. Barnabas looks very disappointed at him, saying he didn't follow instructions, and wants to know why he let Amy into the Chosen Room. Alex realizes that David has told Barnabas about what happened, and becomes very furious. Barnabas reminds Alex that Alex must always obey his orders, and decides to lock him in the Chosen Room as punishment.

At Collinwood, Stokes shows Julia the portrait of Amanda Harris. In return, Julia shows Stokes the painting she found in the West Wing that is very similar to the Tate painting. He looks very surprised at how similar the paintings are, and agrees to investigate further.

Elsewhere on the estate, Chris returns to his cottage and discovers a terrified Amy.

Amy has lost her ability to speak. She writes on a piece of paper "SHOP" when Chris asks her what is wrong. Julia shows up at the cottage and tries to help Amy, while Chris goes to the antique shop to talk to David about what happened. Amy becomes increasingly terrified when Julia mentions the name "Alexander." Before the conversation gets any further, Barnabas walks in, looking for Chris. Amy regains her speaking capabilities and asks for water. Julia forces Barnabas to get the water. Barnabas puts his hand over Amy, which relaxes her and she then falls asleep. Barnabas says "she will feel much better when she awakes, I'm sure."

Chris returns from the antique shop and tells Julia that David explained to him that Amy saw the man who looks like Quentin, which frightened her and she ran out of the shop. When Amy wakes up, she explains she saw Quentin, but someone else happened to her and she suddenly can't remember. There is then a knock on the door, and Stokes walks in. He says that after talking with another professor, he is almost certain that the new painting was also created by Charles Tate. Julia decides she must go see Harrison Monroe immediately.

Barnabas and Alexander are talking in the drawing room of Collinwood. Alexander asks what will become of Amy now. Barnabas, who has brought the Leviathan Box with him, says when she returns to Collinwood, if she comes in and opens the box, she will be "one of us" now.

Chris brings Amy back to Collinwood. She thanks him for all his help. Once he is gone, she appears to come under a trance, and heads towards the drawing room. Once inside, she walks past Alexander and opens the box. Now under the power of the Leviathans, Amy gives Alexander the picture of Carolyn back and apologizes, but in turn agrees to follow any order he gives her from now on.

Julia arrives at Harrison Monroe's house. A speaker positioned on top of the front door instructs Julia to go away, but Julia says she has a message from Charles Delaware Tate. The door slowly opens, and she enters.

Professor Stokes: I find this exciting. It's like being in the middle of a mystery novel and not knowing what the end will be.

Dark Shadows - Episode 912 on the IMDb 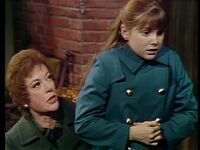 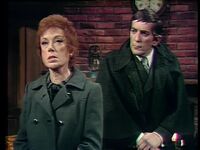 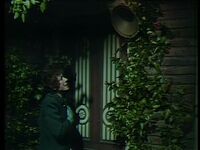 Harrison Monroe's House
Add a photo to this gallery
Retrieved from "https://darkshadows.fandom.com/wiki/912?oldid=139989"
Community content is available under CC-BY-SA unless otherwise noted.