A dark midnight at the great house of Collinwood. A time of crisis for all who live there. Crisis somehow connected with the Leviathan box that Barnabas Collins has brought from the past. But now they sleep, not knowing that in a room in the west wing, a room that remained in monument to the past, a woman is trying to make a man with no memory realize who he is.

Hearing Quentin's music doesn't help Grant regain his memory. Julia thinks he is lying and that he just doesn't want to admit he is Quentin. Elsewhere in the house, David wakes up and hears Quentin's music.

David is walking through the West Wing and enters Quentin's room. Julia hides Grant behind a curtain before David comes in. David is frightened and asks Julia why she is in Quentin's room; Julia tells him she is just looking at the paintings in the room. David sees Grant's feet, and realizes that someone else is in the room. He panics and runs out. Julia and Grant decide to leave the house, but as they do, David sees Grant from a distance.

As Grant leaves the house, Julia apologizes that she wasn't able to help, but agrees to tell him more of Quentin's past later on.

Julia goes to the antique shop and sees Alex. She asks him if he saw a young blonde girl with pigtails - the younger Carolyn - but he denies everything. Elizabeth brings David and Amy to the antique shop to play with Alex, while Elizabeth and Julia have some things to do. Before they leave, Julia notices that Alex has a strange birthmark on his wrist, similar to the one that the baby had. Once they are gone, Amy discovers the picture of young Carolyn that Alex had dropped. Alex wants it back, but Amy refuses to give it to him. Alex gets frustrated, but David says he will get the picture back.

Julia and Elizabeth are in the West Wing of Collinwood, searching for old family portraits. Elizabeth notices that Julia is upset about something. Upon asking why, Julia asks Elizabeth to not let David and Amy play with Alex anymore.

Elizabeth is suprised at Julia's request. Julia apologizes, but feel there is something different about Alex that frightens her.

At the antique shop, Amy still won't give the picture of young Carolyn back to David and Alex. David threatens to send Quentin after Amy if she doesn't give them the picture back. Amy gets scared and runs to a different part of the shop.

Back at Collinwood, Elizabeth and Julia have found a painting that looks almost exactly like the painting Julia bought from the antique shop. The painting was done by someone named Harrison Monroe in 1968. Julia wonders how two paintings can look so similar, and decides to take it to Professor Stokes for help.

David continues to threaten Amy with Quentin. They decide to play hide-and-seek, with Amy searching for David and Alex. When David and Alex hide, Grant walks into the antique shop, who is there to pick up a book that had been left for him. Amy sees Grant, and runs upstairs in horror. David gives Grant his book, and he leaves the shop.

While upstairs, Amy hears the sound of breathing coming from the Chosen Room. She opens the door and screams.

David: All doctors are nosy.

Alexander: I like that house. There's so many places to hide.

Julia: (to Elizabeth, of Alexander) Please don't let Amy and David play with that child again.

Grant: Well, David Collins, you're a most unusual young man.

Grant: A ghost with amnesia. You know, that could be fascinating. I might be able to forget I'm dead.

Dark Shadows - Episode 911 on the IMDb 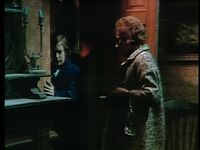 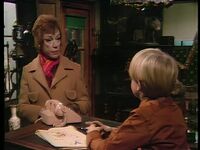 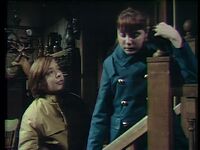