Professor Stokes has the landscape painting removed from the Charles Delaware Tate canvas, revealing a portrait underneath.

In their time, those who live in the great house at Collinwood have been plagued by many mysteries. On this night, Julia Hoffman ponders the identity of a mysterious stranger who recently arrived in Collinsport. She is certain that the man, suffering from amnesia, is really Quentin Collins. But her efforts to prove it have been thwarted by another mysterious figure, a woman named Olivia Corey.

Olivia brings Grant to her hotel room. She is constantly staring at Grant, and she asks if he recognizes her. Grant says if she knows him, she will have to tell her where and when they met. Olivia merely says "it was a very long time ago."

Olivia is frustrated that Grant doesn't recognize her. Grant decides to leave, but Olivia tells him she will do whatever it takes to help him regain his memory and convinces him to stay.

At Collinwood, Elizabeth enters the drawing room and sees Julia. Elizabeth tells her she is very concerned over Paul's behavior. As they are talking, there is a knock on the front door. It's Chris, who has the Tate painting and x-rays. Julia informs him that Grant went off with Olivia, and they both wonder why she is so interested in him. Chris shows her the x-ray, and realizes there is a portrait underneath the landscape.

Chris and Julia decide they must find out whose portrait is underneath the landscape before Olivia can get her hands on the Tate painting. She calls Professor Stokes, and he says he knows someone who can remove the top layer of the painting. She tells Stokes she will have Chris bring him the painting.

At Olivia's hotel room, Olivia is still trying to help Grant regain his memory. He seems to momentarily remember a tune of music, but the memory quickly goes away. Julia then shows up, and asks to speak with Olivia alone. Julia wants to know why she brought Grant to her hotel room. She doesn't say exactly why, but she agrees to cooperate with Julia.

Chris meets with Stokes and Professor Osmund, who will restore the painting. Osmund tells Chris that Tate died about ten years ago, which worries Chris.

Olivia agrees to let Grant leave with Julia for the time being. Grant refuses to believe he might be someone who was born almost a hundred years ago, but decides to head to Collinwood anyway.

Julia and Grant arrive at Collinwood. Grant remarks that it is a very nice house, but nothing rings a bell to him. He gazes at the portrait of Barnabas before heading upstairs.

At Stokes' office, Stokes tells Chris that the writing samples between Amanda and Olivia are very similar, but he wants a few more days to look over them to be sure. Eventually, Professor Osmund removes the landscape layer from the Tate painting, revealing a portrait of Amanda Harris.

Back at Collinwood, Julia takes Grant through the West Wing and into Quentin's room. She starts to play Quentin's music, in hopes that Grant will regain his memory.

Olivia: Have you no memory at all?
Grant: Listen, I don’t even know whether I’m right or left-handed.

Dark Shadows - Episode 910 on the IMDb 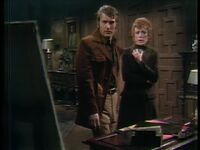 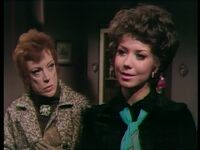 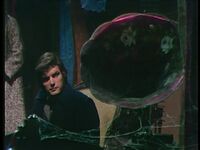 Music Memory
Add a photo to this gallery
Retrieved from "https://darkshadows.fandom.com/wiki/910?oldid=139760"
Community content is available under CC-BY-SA unless otherwise noted.