Grant's possessions give no clue to his identity, but Olivia wants to help him.

Sunshine lies peacefully on the walls of Collinwood. But inside, dark terror stalks Paul Stoddard. A terror somehow connected with Barnabas Collins and the Leviathan box he has brought from the past. A terror reflected in the face of a small boy, who seems to be playing an innocent game.

As Paul searches for Alexander, he hears the sound of breathing coming from behind a curtain. Paul opens the curtain and sees a small girl. The girl asks "Why did you do it, daddy, why?" She runs off.

Paul searches the house for the girl. He asks Julia if she saw the girl, but Julia says she didn't see anyone but David, who is playing hide-and-seek. While searching the drawing room, he notices the photo album and realizes the girl he saw was an 8-year-old version of Carolyn.

Chris is visiting Olivia at her hotel room. She says she has been trying to contact Julia for a long time, but has been unsuccessful. Chris tells her she has been working with a patient known as Grant Douglas, and that has been taking up much of her time. Olivia says she has someone who wants to see Julia's Tate painting.

At the hospital, Julia is showing Grant some of his possessions he had on him at the time of the accident, including a key and a book of matches, but they do not help him regain his memory. Julia suggests hypnosis as a method to help him.

Paul is still searching for the girl at Collinwood. She walks in through the front door. She tells Paul to stay away, as she "hates him for what he did," and disappears in the drawing room.

Julia hypnotizes Grant at the hospital. While in the trance, Grant becomes increasingly frustrated when he can't say his name. He only says that he has to leave immediately "because of him." Julia asks who he is running from, and Grant says the name "Frederick Thorn." Julia ends the session, and asks who Frederick Thorn is, but Grant says he has never heard of him. Julia tells him they are beginning a long journey to remembering his past.

As Julia leaves the hospital, Chris comes to talk to her. He informs her that he has found out that Olivia and Mr. Nakamura had her painting x-rayed.

At Collinwood, Paul is still paranoid about seeing a young Carolyn. He chases her into the study, but Alex comes out instead. Julia arrives and sends Paul away to his room, and tells Paul she will take care of Alex.

Julia returns to the hospital and tells Grant that she has arranged a place for him to stay. Grant thanks her, but then informs her he won't be going with her. Julia asks where he will go, and Olivia then enters the room and tells Julia that Grant will be leaving with her.

Grant (looking at the matchbook that was in his pocket the night of the accident): And he seems to spend a lot of time in places like the High Hat Lounge...which promises that if you go there, you'll forget all your troubles. Hm. Brother, that's nothing compared to what you can forget at Collinsport.

Grant: I told you, doctor. I still consider myself Mr. Nobody.
Julia: Grant, what happened to you is horrifying, but if you will cooperate with me, there are ways of waking the part of your mind that's asleep.
Grant: Why? So that I can go back to my 55-dollar-a-month apartment and my rollicking evenings at the High Hat Lounge?

Julia: Will you put yourself in my hands as long as is necessary and stay in Collinsport?
Grant: Sure. Why not? As long as the drinks are on the house.

Dark Shadows - Episode 909 on the IMDb 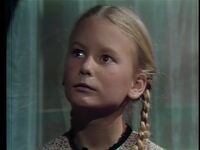 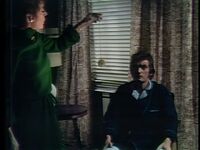 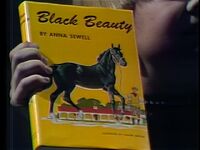 Black Beauty
Add a photo to this gallery
Retrieved from "https://darkshadows.fandom.com/wiki/909?oldid=139756"
Community content is available under CC-BY-SA unless otherwise noted.