Roger becomes furious at Elizabeth for allowing Paul to return to Collinwood.

The great house of Collinwood has a new guest: Elizabeth Collins Stoddard's former husband, Paul. He has come believing that at last he has an ally in fighting the mysterious forces of evil which threaten him. But what he does not know, is that Elizabeth is one of them. And that it is her duty to bring someone to the house who will discredit him forever.

Paul is upset with Alex's presence at Collinwood, and says "he is one of them." Elizabeth tells Paul that if he wants to stay at Collinwood, he needs to watch what he says about other people.

David and Alex are playing in David's room. When Maggie leaves, David wants to know "what to do next" and how he can help. Alex tells him to not ask so many questions, but he needs a photo album that has pictures of Carolyn from when she was growing up. David leaves the room, and Elizabeth walks in. Elizabeth tells Alex that "he is suspecting," but Alex assures her that he will be alright.

Paul sees Maggie and asks to meet with her in drawing room. He tells her that Alex is not who he seems to be. Maggie thinks otherwise, but Paul again asks her to believe him, as she did before.

Maggie tells Paul she is willing to listen to him. Paul tells her that there is a plot against everyone at Collinwood, and that Alex, Megan, and Philip are involved, and Barnabas is their leader. He wants Maggie to try to get evidence that the plot exists, such as how long Alex is going to stay at Collinwood, and everything she knows about the Todd family. Alex is eavesdropping outside the doors, and is caught by Paul. Elizabeth stops Paul from harming Alex, but Alex is frightened. Maggie is interested in what Paul has said, and asks again what he wants her to do.

Elizabeth is trying to calm down Alex. David arrives with the photographs Alex had requested. Alex looks very pleased. David then takes the photo album to Paul in the drawing room. Paul seems troubled as he looks at the photo album.

Roger returns to Collinwood, having been away on a business trip. Roger has a present for David, which is a transistor radio. After Roger leaves, Alex takes away the radio and tells David he is going to give it to him, no questions asked. David seems sad at first, but then agrees. Unknown to them, Maggie has been watching them the entire time. After the boys leave, Maggie thinks to herself that there is something strange about Alex, and that maybe Paul was right about a plot going on at Collinwood.

While Roger is talking to Maggie, he notices Paul at the top of the stairs. Roger immediately becomes upset, and Paul tells him that Elizabeth brought him back to Collinwood. When Roger asks Elizabeth about Paul being back at Collinwood, Elizabeth tells him she did it so Carolyn would be happy.

Paul returns to his room at Collinwood. He hears a noise, realizes that Alex is hiding behind a chair, and is apparently playing hide-and-seek with David. Paul starts asking him questions, such as how long he will be staying in Collinsport, and if Philip is actually his uncle or not. Alex manages to escape Paul's room, and hides behind a curtain in the hallway. When Paul enters the hallway, he hears the sound of breathing coming from behind the curtain.

Dark Shadows - Episode 908 on the IMDb 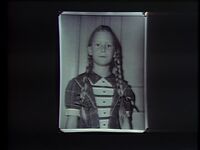 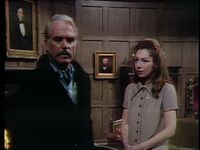 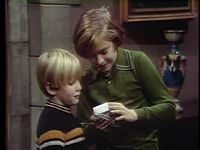 David's Radio
Add a photo to this gallery
Retrieved from "https://darkshadows.fandom.com/wiki/908?oldid=139741"
Community content is available under CC-BY-SA unless otherwise noted.