Paul moves into Collinwood and finds that Elizabeth does not believe his story that there is a plot against him.

A strange evil affects the lives of those in the great house of Collinwood. Deceit and treachery are becoming a way of life. And in a hotel room in the neighboring village, Elizabeth Stoddard hears a plot. A plot which Paul Stoddard insists threatens them all and begs her help. She makes a strange and sudden decision.

Elizabeth invites Paul back to Collinwood. He agrees, and he leaves to get Carolyn. Once he is gone, she phones Barnabas and tells him that everything is going according to plan.

Paul meets Carolyn at the train station. She is surprised that Elizabeth has invited him back to live at Collinwood, and doesn't know which side to take. Carolyn says she doesn't know why, but she feels they should get on the train and leave Collinsport forever. But the train takes off, and the two decide to go back to Collinwood.

Barnabas is watching over Grant at the hospital. Thinking that Grant really is Quentin, he decides he must kill him to keep him from interfering with his plans. As he is about to strangle him, he stops himself, remembering that Quentin once saved him from dawn when he was a vampire. Barnabas decides he will give Quentin/Grant one more chance at life.

Paul has returned to Collinwood. He and Carolyn are very excited, but Elizabeth looks skeptical. Paul is upset about the portrait of Barnabas, but Elizabeth says he will have to deal with it. Elizabeth admits that she didn't believe him when he said there is a plot against everyone at Collinwood, but she will try to help him deal with it anyways. While Paul and Elizabeth are arguing in the drawing room, Julia is eavesdropping outside. She hears Paul say that Barnabas is evil, and something must be done to stop them. Paul senses that someone is standing outside the door; he opens the door and catches Julia, and is convinced that she is "one of them."

Elizabeth stops Paul from harming Julia, and makes him apologize. Paul tells everyone that none of them will convince him he is "sick," and they need to stop trying.

Barnabas is still at the hospital room, and refers to Grant as Quentin. He wakes up, and a confused look comes across his face.

Elizabeth sees Paul looking at the portrait of Barnabas at Collinwood. She offers to have it taken down, but Paul says she can leave it up, saying every time he looks at it, it gives him evidence and inspiration to fight the evil that is about to strike Collinwood.

Carolyn and Julia are visiting Grant at the hospital. Barnabas walks in. Julia scolds him for being there, saying he cannot have any visitors. Grant then wakes up again, and wonders why Carolyn is calling him Grant, which surprises Julia.

Grant wakes up and wonders why everyone is looking at him so funny. He wonders why he is in Collinsport, and appears very confused about his past.

Outside his room, Julia accuses Barnabas of "erasing" Grant's memory. Julia assures Barnabas that whether or not he did take Grant's memories, she will get Grant to regain them.

In Grant's room, Grant tells Carolyn that Barnabas referred to him as Quentin Collins. Carolyn looks shocked, and says that isn't possible, because Quentin Collins lived almost 100 years ago. Grant looks more confused than ever.

Julia and Paul are talking in the drawing room at Collinwood. She demands to know why he feels that Barnabas is evil. Paul feels that Barnabas is connected with "some group or organization." Before he can continue, Barnabas shows up, and welcomes Paul back to Collinwood. Paul, very upset, leaves the room. Julia then leaves as well, saying she and Barnabas have nothing to say to each other. Elizabeth arrives, and wonders if bringing Paul to Collinwood was a mistake. But nonetheless, he needs to be dealt with. Barnabas informs Elizabeth that Paul will be dealt with by "someone else."

Carolyn: (about Mrs. Johnson) Mrs. Johnson is as full of complaints as ever. Really, Julia, I wish you'd give her something to improve her disposition.

Paul: I know one thing. Barnabas Collins is an evil man.

Quentin: Stranger things have happened to me in my life.

Julia: (to Barnabas) Do we really have anything to say to each other?

Paul (looking at the portrait of Barnabas as he arrives at Collinwood): Well....It's nice to be greeted by such a friendly face.

Paul: Well...why don't we all have a drink? That's what normal, ordinary people do on a festive occasion.

Paul: Elizabeth, I'm not mad. I'm in a curious position...of knowing the criminals...but not the crime.

Carolyn: You asked me for a date.
Grant (Quentin) (with amnesia): Well...Grant Douglas is a genius. Whoever he is, his heart is in the right place...and his mind and eyes. I think I like him.

Julia: Mr. Stoddard, I want something from you.
Paul: Well, you're the only one in this house who does.

Dark Shadows - Episode 907 on the IMDb 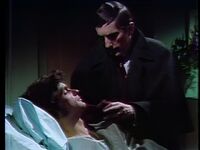 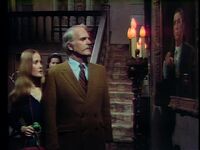 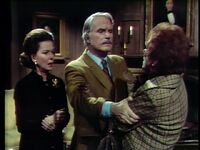 Accosting Julia
Add a photo to this gallery
Retrieved from "https://darkshadows.fandom.com/wiki/907?oldid=139739"
Community content is available under CC-BY-SA unless otherwise noted.