Carolyn and Paul plan to leave Collinsport, but Elizabeth invites him to stay.

The great house of Collinwood is surrounded by danger. The force of evil that is at work here has no name as of yet, and still goes unseen. But it is real and terrifying. And it stands poised to strike terror into the hearts and minds of all who stand in its way.

Carolyn and Megan are working at the antique shop. Suddenly, Carolyn hears a tapping sound coming from upstairs. She asks Megan if she hears it, and says she does. Megan doesn't think anything of it, but Carolyn becomes increasingly paranoid. A ball then comes rolling down the stairs. When Carolyn looks at the top of the stairs, she sees a small boy.

Megan introduces the small boy to Carolyn as Alexander Todd, and says he is Philip's nephew. Alex appears to take a liking to Carolyn. Julia calls the antique shop, and tells Carolyn she can come visit Grant at the hospital for a while. Once Carolyn leaves the store, Alex remarks to Megan that he "likes her very much," to which Megan replies "we knew you would." Megan goes upstairs, leaving Alex alone in the antique shop. Paul then walks in, looking for Carolyn. Alex tells him she will be back soon, and Paul says he will wait. Moments later, Alex walks up to a calendar on the wall, and circles "January 15, 1970" with a red marker. Paul quickly asks why he did that, and Alex says that's when his birthday party is. Paul looks very confused, and decides to leave the shop. As he walks out, he sees Barnabas, who tells him "everything is going along splendidly."

Barnabas meets Alex. Megan tells Barnabas she will miss Joseph, but is confident that soon Alex will make her forget all about the baby.

Paul returns to his hotel room, where he finds that someone has been to his room while he was out and circled "January 15, 1970" on his calendar. Carolyn shows up and gives Paul the check that Roger had wrote to him which would get him out of Collinsport forever. Paul says he doesn't want to leave Carolyn, and rips up the check.

In the drawing room at Collinwood, Barnabas and Elizabeth are talking about Grant and his condition. Elizabeth remarks how she hasn't seen Carolyn in a while. As she says this, Carolyn enters the house, overhears Elizabeth, and sneaks upstairs.

Paul is in his hotel room packing up his things. The phone rings. He tells whoever it is that he is leaving on a train to Boston later that evening, and to meet him there, and to not be seen.

Megan is closing up the antique shop and tells Alex it is time for bed. Alex says he doesn't want to go to sleep, and says he feels very lonely. Megan demands to know what is wrong with him, but he doesn't say anything.

Elizabeth storms into Paul's hotel room as he about to leave. She tells him that Carolyn has disappeared from Collinwood, and all of her clothes are gone. Paul tells Elizabeth that not only Carolyn, but everyone at Collinwood is in danger. He goes on to say that Barnabas is their "leader." Elizabeth, who appears to go into a trance, says she has noticed that Barnabas has acted differently since his return from the past. Elizabeth then invites Paul to return to Collinwood, which shocks Paul. Elizabeth says if there actually is danger, then he should be there to protect everyone. She asks him where Carolyn is. Paul says she is waiting for him at the train station. Elizabeth instructs Paul to go get Carolyn and bring them back to the hotel room, while she phones Collinwood to let them know that Paul will be returning.

Once Paul leaves, Elizabeth calls the antique shop. Barnabas answers the phone, and Elizabeth tells him that "everything is going according to plan."

Carolyn: Goodbye, Alex. You and I are going to be seeing quite a lot of each other!

Paul Stoddard: They're like an organization! They're EVIL, Liz! Terribly evil!

Dark Shadows - Episode 906 on the IMDb 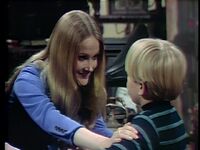 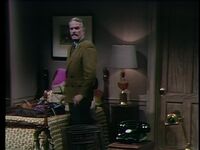 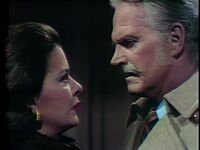