Julia recognizes the stranger who goes by the name Grant Douglas, but he cannot recall his past.

Since the return of Barnabas Collins from the past, strange and terrifying events have begun to re-shape the lives of those who live at Collinwood. On this night, in a Collinsport antique store, Carolyn Stoddard waits for a mysterious stranger she met earlier. Unaware that tragedy is but a moment away.

The stranger is outside the store. A car appears and strikes him. Barnabas gets out of the car, saying he was unable to avoid hitting him. Carolyn refers to him as the man who was coming to meet her.

The stranger is still alive, but unconscious. Carolyn rushes in to the antique shop to call an ambulance, as Barnabas stays with him.

At Collinwood, Julia informs Chris that she is having Professor Stokes analyse the writing samples of Amanda Harris and Olivia Corey, to see if they are the same. Julia expects to have an answer within a few days. After Chris leaves, the phone rings. It's Carolyn, who is at the Collinsport Hospital. She tells Julia there has been an accident, and she needs to get to the hospital. Julia rushes out of Collinwood.

Carolyn is in a hospital room, with the man who was hit by Barnabas's car. The stranger looks exactly like Quentin.

Julia arrives at the hospital. Carolyn explains to her that the man's name is Grant Douglas, and he has suffered a brain concussion and is still unconscious. When Carolyn says the man's name, Barnabas appears to realize that might not be his real name. Julia walks into the hospital room, and is shocked upon seeing who is in the bed. Carolyn asks if she knows who he is, but Julia denies everything. Julia leaves the room, wanting to talk to Barnabas, and tells Carolyn to stay with Grant.

In the hospital lobby, Julia scolds Barnabas for not calling her after the accident happened. Barnabas says he does not care if the man is Quentin or not, and he only cares that the man is dying and that he is responsible. Julia says she knows the man is really Quentin, and that "there is more than just coincidence going on here." She leaves, and Barnabas does the same soon afterward.

At the antique shop, Megan arrives. She calls out for Carolyn, but she is not there. Suddenly, a rush of wind enters the shop, and lights go out. Barnabas's voice is then heard, telling Megan, "I am coming to you."

Megan goes into a trance. In the trance, Barnabas enters the antique shop. He tells her that she and Philip have cared for Joseph very well, but the time has come for a new phase. The Chosen Room will undergo a change, and she will not know until it happens. If people ask questions, Megan will tell them that "Philip's brother" is responsible.

Megan comes out of her trance. She opens the desk and opens the box that David had brought to the antique shop in the middle of the night. Inside the box are clothes that would appear to be for a small boy.

Chris and Julia are at the hospital. Julia tells him she knows why Jenny Collins appeared to him, and she believes that Quentin has returned. Chris doesn't believe that Grant is Quentin, but Julia says she will check up on his records to make sure.

Megan and Carolyn are talking at the antique shop about what happened the previous night. Suddenly, Megan becomes visibly upset and walks towards the staircase. Carolyn thinks nothing of it and goes about her duties. She finds a toy that the baby might like, which upsets Megan even more, and Carolyn wonders if she has done something wrong.

Julia returns from doing research that Chris had suggested. She finds that there is a Grant Douglas who lives in Portland, but he has no immediate family and no previous address. He also has no fingerprints or any job history. Chris remarks that Julia was very thorough, to which Barnabas enters the room and says, "Yes Chris, very thorough indeed."

Barnabas says the door was open and couldn't help overhearing their conversation. He asks Julia how the patient is doing, to which Julia forcefully replies he will survive. Barnabas and Julia then get into an argument as to whether they think Grant is Quentin, which quickly ends in frustrations with Julia accusing Barnabas of random mood swings. Barnabas leaves, and Chris follows suit shortly thereafter. Once they are gone, Grant comes out of his coma. Julia asks him if he is Quentin.

Carolyn and Megan are working at the antique shop. Suddenly, Carolyn hears a tapping sound coming from upstairs. She asks Megan if she hears it, and says she does. Megan doesn't think anything of it, but Carolyn becomes increasingly paranoid. A ball then comes rolling down the stairs. When Carolyn looks at the top of the stairs, she sees a small boy.

Megan: Life is so strange sometimes.

Julia: Quentin Collins exists. It's the Barnabas that I once knew who doesn't.

Julia: There is more than coincidence going on here, Barnabas...much more.

Chris (re: Barnabas, after Barnabas angrily tells him Grant Douglas could not possibly be Quentin Collins): He gets more cheerful every day.

Megan: We have achieved so much more than happiness.
Carolyn: So much more?
Megan: You look surprised. But I've learned something exists beyond what we call happiness...and someday I hope you discover it too.

Dark Shadows - Episode 905 on the IMDb 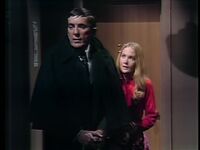 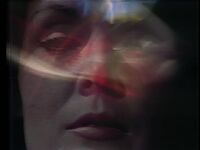 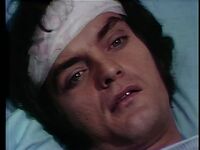 Grant Conscious
Add a photo to this gallery
Retrieved from "https://darkshadows.fandom.com/wiki/905?oldid=139733"
Community content is available under CC-BY-SA unless otherwise noted.