Barnabas finds Carolyn is infatuated by a stranger, and Elizabeth has a bizarre dream.

Night has faded over Collinwood, but for one woman, the darkness still remains. Elizabeth Stoddard, teased and taunted by young David's lies, has suffered a night of doubt and dispair. And with the day, she has come to the village, determined to learn what drew David to this place.

Elizabeth enters the antique shop. Carolyn greets her, and Elizabeth demands to see Megan. Carolyn tells her that Megan and Philip are out of town for the day. Elizabeth then tells Carolyn she doesn't want her to come to the antique shop anymore.

Elizabeth explains to Carolyn that she saw David come to the shop late last night, and thinks whatever is wrong with him relates to the shop. Carolyn shrugs off her claims, and says David was only returning the book that he had stolen previously. Elizabeth wonders why David just won't tell her the truth. After she leaves the shop, the man who was eavesdropping outside the shop the previous day enters. Carolyn smiles at him as he looks around.

At Collinwood, David is reading the Leviathan Book. Elizabeth walks in, and scolds David for lying to her, but she still remains suspicous about Megan's behavior. She notices the book that David is reading. David gives it to her after she asks to see it, and she begins to read it.

Elizabeth closes the book and asks why he is reading it, but he manages to get out of her questions. However, she takes the Leviathan Book and plans to take it to Megan.

Later that day, Barnabas enters the antique shop. He notices Carolyn is acting very giddy. She explains to him that she met a man in the shop earlier in the day, and she appears to be infatuated with whoever it was. Barnabas seems very surprised at this news, but Carolyn says he will be returning to the shop later that night.

Barnabas meets with David at Collinwood. David is troubled at what Elizabeth has done concerning the book he stole from the antique shop. Barnabas offers to take him for a walk so David can explain his troubles. David agrees, and they both leave the house as if they were in a trance.

That night, Barnabas is talking with Elizabeth. She is confused with David's behavior. Barnabas gives her a suggestion that she should simply go to her room and try to relax and forget everything that has been going on lately. Barnabas takes back the Leviathan Book after she goes to her room.

Elizabeth has a strange dream as she falls asleep. She is at some sort of carnival. David has brought her there so she can "have fun like everyone else." David tries to get her to look into a series of mirrors, but she doesn't want to at first. He finally gets her to do so, and when she does, she sees clowns laughing at her at first, and then Barnabas appears in the final mirror.

Outside the antique shop, the unknown man is crossing the street to head into the store. A car appears and strikes him. Barnabas gets out of the car, saying he was unable to stop in time. Carolyn recognizes him as the man who was supposed to meet her.

Barnabas: And the enemy shall be overcome one by one.

Elizabeth: (upon seeing Barnabas in her Leviathan dream, to David) Is it a trick, or is he really there?
David: (excited) Well, what do you think?
Elizabeth: I don't know, but I like it. Yes, I like it! (They all laugh.)

Carolyn: Mother, you're getting as bad as David when you find something sinister in a box from Brewster's.

Barnabas: Your Aunt Elizabeth has a way of taking things very seriously, doesn't she?
David: If you ask me, she has a way of making trouble.

Dark Shadows - Episode 904 on the IMDb 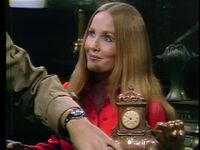 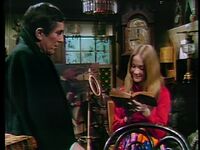 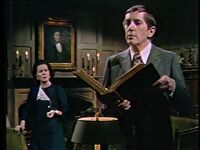