The night has fallen over Collinwood, and its darkness conceals many things, including the reason the young boy left his home on an inexplicable errand. But Elizabeth Stoddard has seen her nephew, David, enter the Todd's antique shop late at night, and is determined to find out why.

David is in the Chosen Room, speaking to the breathing noise. He hears Elizabeth from outside the door, and begins to look worried.

Elizabeth hears the breathing noise coming from the Chosen Room, but Megan dismisses it as a broken radiator. Elizabeth wants to go into the room, but Megan tries to convince her to stay out. Elizabeth finally gets her way, but before she can open the door, a crashing sound is heard from downstairs. She comes to the conclusion that David isn't there, and leaves. David walks downstairs, and the two wonder who caused the noise that distracted Elizabeth.

Julia and Olivia are at Olivia's hotel room, discussing the works of Charles Tate. Olivia says no one really knows whether Tate is dead or alive. She asks Julia for permission to photograph the painting she purchased from the antique shop, and Julia agrees. After Julia leaves, Olivia's servant and photographer, Mr. Nakamura, walks in, and Olivia tells him that "everything is going according to plan."

At Collinwood, Julia is explaining to Chris that she feels Olivia is not the person she claims to be. Julia shows Chris a letter she found in the West Wing of Collinwood that was written by Amanda Harris to Quentin in 1897, and wants Chris to get a sample of her hand writing.

Chris takes the painting to Olivia and she has Mr. Nakamura photograph it. While she is out of the room, he searches the room for a hand writing sample, but is unsuccessful.

Back at Collinwood, Elizabeth goes to David's room and catches him as he is about to go to sleep. She tells him she knows he was out in the village. David tries to weasel himself out of trouble, but Elizabeth tells him there is no point in lying, and she angrily walks out.

At Olivia's hotel room, Chris is getting impatient as to how long it is taking to have the Tate painting being photographed. He bursts into the room, much to Olivia's dismay, and notices Mr. Nakamura is missing.

Before Olivia can explain what is going on, Mr. Nakamura returns with the painting. Chris apologizes for his behavior, but before he leaves, he asks for her autograph. She finds his request slightly odd, but gives him one anyway. After he leaves, Olivia remarks to Mr. Nakamura that Chris could be very useful to them someday. She asks him how long it will take to find out what he left for, and he replies it will take one hour.

Chris returns to Collinwood with the painting and Olivia's autograph. Julia analyzes the autographs. They look very similar, but she wants to have Stokes look at them to give a second opinion. Julia and Chris wonder why it took Mr. Nakamura so long to photograph the painting.

At Olivia's apartment, Mr. Nakamura returns with an x-ray of Julia's painting. The x-ray shows there is a portrait of someone underneath the landscape.

Julia: You should know that it's possible to have a secret that no one in the world will ever understand or believe, Chris.

Megan: I'm sure there's a rumor around that the Todds keep a pet rhinoceros.

Dark Shadows - Episode 903 on the IMDb

Dark Shadows Everyday - Episode 903 - Sentences Taken at Random from H.P. Lovecraft Stories That I Have Not Read 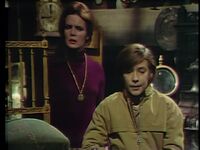 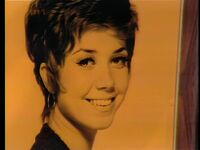 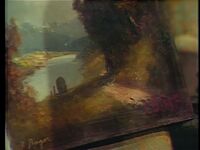 Julia's Landscape
Add a photo to this gallery
Retrieved from "https://darkshadows.fandom.com/wiki/903?oldid=142653"
Community content is available under CC-BY-SA unless otherwise noted.