Barnabas and Julia learn the secret of the west wing. With the aid of Professor Stokes, Barnabas explores the mysteries of the I-Ching.

Late afternoon at Collinwood. Somewhere in the great house, young David Collins remains a prisoner of the supernatural, but Collinwood is ruled now by the malevolent spirit of a man long dead, a man trying to complete the evil scheme he could not complete when he was alive. On this day, two people have returned to Collinwood, believing they know in which part of the house young David Collins is being held.

Barnabas and Maggie scour the West Wing looking for signs of David. Barnabas discovers the secret panel in the wall and pries it open with a crowbar that Amy left behind (699).

Barnabas and Maggie enter Quentin's room for the first time and begin exploring. Suddenly, they both turn their heads to the sound of approaching footsteps as Professor Stokes enters the room.

Stokes believes that this room is where Quentin Collins died. It is the only explanation as to why it could have been sealed up, and when the seal was broken, Quentin's spirit was let loose. Stokes continues poking about and discovers Amy Jennings hiding behind a curtain. The child is catatonic and falls over onto the floor. Maggie scoops her up and takes her back to the Old House.

Barnabas and Professor Stokes continue searching for clues. Stokes opens a drawer where he discovers an ancient set of I-Ching divination wands that once belonged to Quentin Collins and a journal. He tells Barnabas that he will need some time to research the journal, but that the I-Ching is the least understood form of divination and mysticism, and that if Quentin was involved with it then it must have been for evil purposes.

At the Old House, Amy continues acting strangely. She says David is at Collinwood and Quentin wants Maggie, and only Maggie, to find him. Maggie presses her for information, but it is clear that the child is still under Quentin’s influence. Amy reveals that Quentin wants to transform David into someone named Jamison and when he succeeds, David will die.

Maggie races back to Collinwood. After searching upstairs, she begins to descend the staircase to the Foyer as David emerges. He is frozen in terror and tells her to stay upstairs where she is. Quentin still has a strong hold over him. Maggie beckons to him, calling him down the stairs. She shouts into the air, screaming at Quentin. She tells Quentin that he cannot have David any longer. For a moment, it appears as if Quentin's hold on the boy has lapsed, and Maggie tells him he must send Quentin away. But suddenly, David collapses into her arms upon the stairs.

Maggie brings him back to the Old House, but David is in a deep coma. Julia examines him, and deduces that Quentin is still in control of him. Unless something is done quickly, David will die by morning.

Barnabas finds Professor Stokes and brings Julia and Stokes to the basement of the Old House. Barnabas presses Stokes to tell him more about the I-Ching. Specifically, he asks if the I-Ching wands could be used to communicate with Quentin. Stokes confirms that while it is certainly possible, the use of I-Ching is very dangerous to the uninitiated. Barnabas insists however, and Stokes gives him a crash-course in I-Ching meditative technique and astral projection. Stokes has Barnabas throw the wands and announces that he has thrown #49 - The Hexagram of Change.

He arranges the I-Ching wands and enters into a deep hypnotic state. In the midst of intense concentration, Barnabas envisions himself walking through a heavy iron door. Beyond the door is a familiar, yet terrifying sight – a large, wooden coffin wrapped in heavy iron chains; the same coffin that held Barnabas prisoner for almost two-hundred years.

Julia asks Professor Stokes what is happening and Stokes explains that there are now two Barnabases, one with them and another in the world beyond the doorway. Barnabas gasps and says he cannot see Quentin, but he can not turn back. He says he is in the Mausoleum with the coffin. Stokes asks Julia what she knows about the mausoleum and coffin, but she lies and says she doesn't know anything, but that they must stop Barnabas now. Stokes says that would be too dangerous, if it were even possible.

Maggie: He's not like you, Quentin. I'm going to make sure he never will be!

Maggie: Quentin, I love David. I'm going to take him away from you.

Professor Stokes: It may not be possible to save the boy, but if it is, then the answer's here.

Maggie: You mean David might die?
Julia: Maggie, he is dying.

Professor Stokes: Beyond the door, anything is possible.

Barnabas: Julia, the child is dying. If there is any possibility of contacting Quentin Collins and getting him to release David, then I must try it.

Dark Shadows - Episode 700 on the IMDb

Dark Shadows Every Day - Episode 700 - I Ching the Body Electric 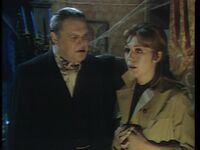 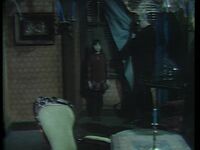 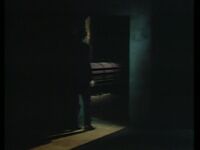 Doorway to Destiny
Community content is available under CC-BY-SA unless otherwise noted.
Advertisement