Barnabas and Julia worry about Chris, who is still a werewolf.

For the first time since it was built the great house at Collinwood is all but deserted. Only young David Collins remains, the prisoner of a supernatural force. In grave danger of being killed off one by one, the family has been forced to move into the Old House. Now, another dawn has come, and while the family fears for David's safety, Barnabas Collins and Julia Hoffman must attend to another crisis, one the rest of the family knows nothing about.

Barnabas and Julia enter the secret room in the mausoleum. Rather than finding an unconscious Chris Jennings however, they instead find the werewolf.

The werewolf leaps at them, but Barnabas manages to shut the door in time, only having to beat him with his cane briefly. Noting it has been more than 2 hours since sunrise, Julia tells Barnabas she is worried that since he has started to change when there is no full-moon and now the change back to human form is late, he may soon not be able to change back at all. She fears the only chance they have of curing him is by killing him. Barnabas reminds her they are closer to finding an answer for his condition than they were before, and that as long as he is confined to the secret room, he and the public are safe from each other. When Julia mentions that others know of the secret room Barnabas tells her he will get Willie to put a new lock on the outer door. At the Old House, Amy tells Maggie she is tired of not being able to leave her room and people watching her all the time. Maggie suspects that Amy may know where David is, which Amy denies too emphatically to convince Maggie. Maggie tells Amy that she realizes now that when she saw Amy running through the woods, that Amy was purposefully wanting Maggie to follow her. When Maggie asks if it was Quentin that instructed her to lure Maggie to Collinwood, Amy looks horrified and denies she knows who Quentin is. Maggie fears that the spirit of Quentin Collins may try to kill David. Julia enters the room just as Amy says that if she tells what she knows, Quentin will hurt Chris. Julia questions her about how specific Quentin was, wondering if there is a connection.

Maggie has Julia take Amy downstairs and goes immediately into a troubled sleep.

In her dream, she finds herself in the West Wing of Collinwood. Wandering around the bric-a-brac covered with more cobwebs than normal, she is shocked to see Mr. Juggins. She finds the hole in the wall that leads to Quentin's room and crawls through to find the room in perfect condition, with the familiar phonograph music that she associates with Quentin Collins. Quentin appears before her, holding a blue evening gown. She does not seem frightened of him and calls him by name, asking why he brought her here. He pushes the dress towards her and she backs away, refusing to take it. He then leans down and gives her a long kiss, then begins to laugh.

Maggie awakens with a start, and races to the bedroom door calling for Julia. When Julia arrives she asks where Barnabas is and tells Julia she had a dream about Quentin. She cannot remember where the room is, but she begins to remember what happened to her the night she fainted at Collinwood. She remembers being in Mrs. Stoddard's bedroom, but thought it was her own. She recalls going down a hallway in the west wing, then seeing Mr. Juggins. Once she remembers where she had seen Mr. Juggins before, she believes that she knows where David may be. Maggie wants to go to Collinwood now, but Julia wants to find Barnabas first and tells Maggie anyone who goes there now is in danger. Julia rushes off to find Barnabas while Amy eavesdrops at the door, then rushes away before Julia leaves.

At the cemetery, Barnabas checks on Chris and hears the werewolf inside the secret room. Julia arrives and tells Barnabas what Maggie has remembered. Meanwhile, Amy goes to Collinwood and creeps into the West Wing and uses a crowbar to remove the panel covering the hole to Quentin's room. Julia and Barnabas arrive and discover that Maggie has been searching for Amy. Barnabas asks Maggie about the room, then he and Maggie go to Collinwood while Julia stays behind to search for Amy. She sneaks through the concealed panel leading into the secret room in the West Wing. While calling out for David, Quentin sneaks up behind her. She warns Quentin that Barnabas and Julia will soon be resuming the search at Collinwood and that they know about his room. Barnabas and Maggie Evans arrive at the great house as Quentin silences Amy who is starting to get hysterical. Following Maggie's directions, Barnabas leads her to the West Wing and finds the secret wall panel and the crowbar Amy used to open it. He tells Maggie he is going to rip off all the panels, then find out what is in the room.

Amy: I don't want anything to happen to David. I'd like to help him, but...
Maggie: But what?
Amy: If I say any more, he'll do something terrible to Chris!
Maggie: Chris?
Julia: Amy? What does Quentin have to do with Chris?

Dark Shadows - Episode 699 on the IMDb 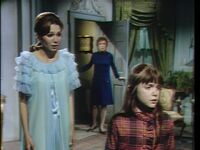 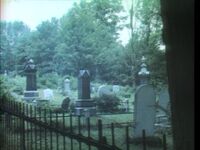 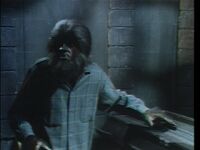 Werewolf
Community content is available under CC-BY-SA unless otherwise noted.