Sabrina begins to regain her memory, and Barnabas fears that she may unwittingly expose Chris' greatest secret.

Night over the turreted house of Collinwood, a night made ominous by the eerie glow of a full moon; its rays lighting the deserted great house, as well as the old mausoleum, where in a secret room, the animal who walks as a man hides from the moon's changing light. He hides, too, from two people from his past, one of whom knows his secret and cannot speak. The other is determined to force the secret out. And in their hotel room, Barnabas Collins makes a last effort to stop their curiosity; an effort which will, ironically, only increase the threat to the man he has sworn to protect.

Ned Stuart wheels Sabrina out of her bedroom and introduces her to Barnabas. Barnabas is taken aback by the poor woman's stricken form. Sabrina becomes fixated on the Full Moon while Ned theorizes that what happened to her could happen to Carolyn, then she notices the wolf's-head handle on Barnabas' cane and begins convulsing. Ned thinks that the sight of the cane is causing Sabrina to remember.

Barnabas tries to calm Ned down saying that he is obviously upsetting Sabrina as Sabrina's tortured mind recalls events from two years ago:

Sabrina walks into Chris Jennings' cottage prepared to surprise him. Chris certainly is surprised, but not for the reasons that Sabrina suspects. He claims that he has been feeling sick and tells her to leave. Sabrina tries to call a doctor, but Chris violently pushes her away. Sabrina leaves the room. Chris grabs a set of iron shackles and begins to chain himself to a radiator. Sabrina decides to return to the room in a final effort to appeal to Chris' sympathies. As she enters the room, she finds a werewolf standing before her...

In the present, Sabrina begins shrieking in fear.

Barnabas returns with Julia after Sabrina has slipped back into her comatose state. Julia begins to examine Sabrina in private, asking her about the wolf's head cane. Sabrina's eyes open and Julia tells her she believes she is remembering and she knows what happened to her and sees she is safe. There is a glimmer of recognition in Sabrina's eyes as Ned bursts into the room demanding to know what Julia was saying and how much longer it will take, even though it has been less than 2 minutes since Julia started. Julia continues her examination with Ned present and discovers that Sabrina's blood pressure is unusually low. Julia recommends that Ned should move Sabrina to Windcliff Sanitarium. Ned lashes out at Julia, telling her that she is not placing Sabrina in a hospital. He also refuses to allow Julia to give Sabrina a sedative. Julia suggests that Ned should seek other medical help and leaves some pills with Ned. Ned asks Sabrina what she remembers, but she just looks away, not answering.

Barnabas and Julia return to the Old House. Julia suspects that Sabrina now remembers that Chris is a werewolf. She fears that if she speaks aloud about it, then Ned will try to have Chris arrested and they will also be held accountable.

Back at the Collinsport Inn, Ned tries to keep Sabrina calm. He leaves the room to get her a glass of water to go with the pills Julia left. Sabrina rises from her chair and approaches a mirror on the wall. Seeing her ghastly expression reflected back at her, Sabrina cries out. Ned runs and grabs her by the shoulders.

Ned, realizing that Sabrina remembers everything and that she is somehow protecting Chris Jennings, forces her to look in the mirror. She looks at the Full Moon as he begins to threaten her and then settles back into her chair and slips back into her catatonic state.

At the Old House, Julia worries that Chris may become a werewolf more and more often, for longer periods of time, and eventually may become a werewolf full-time. Barnabas theorizes there is a connection between he and Quentin. Julia tells Barnabas that she heard Roger and Professor Stokes held a séance last night, but all they heard was laughter. They head to the mausoleum to collect Chris. When they open the secret door however, they are startled to find that Chris is still a werewolf.

Ned: Don't I owe you something?
Julia: (through gritted teeth) I'll send you a bill.

Sabrina: This is a symptom of the flu?

Sabrina: There's no point in having a party if it's not a surprise.
Chris: Get out!

Julia: We have been shielding a... a werewolf.

Barnabas: You were more patient when you were treating me.

Ned: (to Sabrina) You're protecting him, aren't you?

Julia: How far fetched all our schemes are.

Dark Shadows - Episode 698 on the IMDb 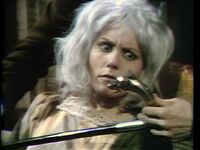 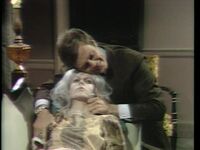 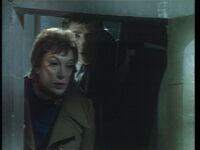