Ned believes that Chris may hold the key to his sister's recovery, but Chris has more pressing matters to concern himself with as the full moon begins to rise over Collinsport.

A somber night over the great estate of Collinwood, a night filled with forebodings and disaster; for a child is missing, lured by the evil spirits who possess him, and no trace can be found. But there is terrifying evidence that the ghosts are still occupying the house, as one man finds when he makes an astonishing and mysterious discovery.

Barnabas continues to search Collinwood for signs of David. He is nearly ready to give up, but something draws him to the Drawing room. Entering the room, he finds Maggie Evans dressed in a 19th century gown, sewing. Maggie has no memory of who Barnabas is, who she truly is, or why she is dressed so strangely. When Barnabas presses her for answers, Maggie shrieks and falls to the floor.

Barnabas helps to revive Maggie, who appears to have returned to normal, but has no immediate memory of what happened. After recalling seeing Quentin's spirit, she tells him that Quentin's spirit had terrorized her, and forced her to wear the gown, and called her by another name. Maggie grows concerned over Amy, but Barnabas reassures her that she is safe back at the Old House, but still under Quentin's possession. Suddenly, Roger returns to Collinwood. He has had no luck finding David, and vows that he will not leave Collinwood until he has found his son. Roger is surprised to see Maggie and says he will call the police. Barnabas agrees to take Maggie back to the Old House, leaving Roger alone in the Drawing Room. As soon as they leave, Roger hears Quentin’s theme-music playing all around him. He angrily calls out to Quentin, but there is no answer. Roger notices a large, dusty book on a table, which opens of its own accord. Inside Roger finds a hand-written note, which reads, "David is mine". Roger vows to find David.

Back at the Old House, Roger tells Barnabas that whenever he tried to call the police he would hear Quentin's laughter. When the police came, they were not able to find anything. He wonders if Professor Stokes who has a theory that during the Full Moon, possessed children show themselves more easily. He leaves as the implications of the Full Moon soak into Barnabas concerning Chris.

Meanwhile, at the Collinsport Inn, Ned Stuart calls Chris Jennings on the telephone. He harasses him at length and warns Chris that Sabrina will soon regain her sanity – at which point, he feels that she will reveal incriminating evidence against Jennings. Ned wants Chris to come over to his room, but Chris refuses. Chris doesn’t have long before the full moon will rise. Ned holds the telephone to Sabrina's head and she says Chris' name. Ned swears to Sabrina if Chris does not come to see her, he will kill him.

In a panic, Chris goes over to the Old House. He tells Barnabas about Ned's antics, but he is more concerned over the fact that he will soon turn into a werewolf again. Barnabas agrees to lock him up inside the mausoleum. Chris worries that he may break out of the mausoleum. Barnabas says he will go to see Ned and try to convince him to leave Collinsport.

Later, Roger Collins returns to the Old House. He asks Maggie about Amy, and Maggie reports that Amy just sits and smiles. Roger shows her a burned piece of fabric, which belonged to the dress Maggie had been wearing when she first went to Collinwood earlier. Roger tells her he found it upstairs in the fireplace of Elizabeth's room. While inspecting the fabric, Maggie accidentally calls Roger, Edward. Edward Collins was Roger's grandfather. Maggie has no idea why she invoked Edward's name.

After securing Chris safely away, Barnabas visits Ned Stuart. He tries to calm the angry man down, but Ned is determined to make Chris answer for his sister's condition. Barnabas tells Ned that Chris has fallen in love with Carolyn Stoddard and that his relationship with Ned's sister is over. He further states that Ned's obsession may be doing Sabrina more harm than good. Ned leaves the room for a moment, then returns wheeling Sabrina into the room and Barnabas is taken aback by her stark, frail condition. While the men speak, Sabrina becomes transfixed on the Full Moon. Then Sabrina notices Barnabas' wolf's-head cane and begins convulsing. Ned takes the cane from Barnabas and holds it up to his sister who recoils and says he believes that the image of the wolf's head on the cane may hold the key towards unlocking her memory.

Maggie: He was so cold and evil. He touched me!

Barnabas: I'm glad a full moon will benefit someone.

Dark Shadows - Episode 697 on the IMDb

Dark Shadows Everyday - Episode 697 - The Young and the Restless 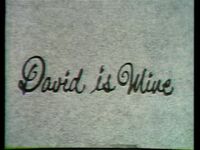 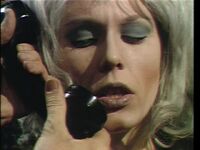 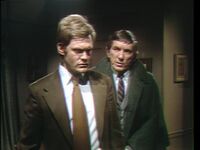