David and Amy make a trip to the deserted Collinwood while Chris Jennings breaks off his relationship with Carolyn.

A new day on the great estate of Collinwood. And a dawn different from any other, for not a single Collins sleeps in the turreted mansion. For the first time in two centuries it is deserted. All have been driven out, forced to flee by an evil spirit who is determined to claim the children as his own. And now the ghostly figures roam the halls, reigning over rooms where once they were unwelcome visitors. And in another house on the estate, Barnabas Collins listens to the children playing and wonders how long they will be safe in their refuge.

David stares out of the window of the Old House when Amy asks him why he is looking out the window and tells him they don't ever have to play "the game" again. Barnabas comes down the stairs overhearing, but when he asks about the game, they make up an excuse and leave. Chris Jennings knocks on the door and tells Barnabas that he saw someone watching wearing old-fashioned clothes with long sideburns. When Chris yelled to the man he disappeared. Barnabas realizes that the spirit has followed them to the Old House.

Barnabas explains that the family has been driven out of Collinwood and is staying at the Old House with him. He has been researching the family history from the late 1800s trying to figure out the relationship between the woman they have seen and Chris. Chris tells Barnabas that he is feeling trapped in Collinsport and needs to leave, but Barnabas talks him out of it temporarily. Chris asks how Barnabas knows so much about what is going on with him. Barnabas sees David playing outside and tells him he can not go outside alone when Maggie shows up threatening David with a history test.

Barnabas tells Maggie about the figure Chris saw and Maggie surmises it is Quentin Collins. She tells Barnabas and Chris about discovering David unconscious murmuring "Quentin" over and over. Barnabas says he just read about Quentin Collins and looks for a photograph. Chris and Maggie both recognize Quentin's photograph as Barnabas reads the sketchy information about him (date of birth, unknown date of death). The photograph was taken just before Quentin left for Paris and Maggie and Chris confirm that he is about the same age as in the photograph. Barnabas assumes that Quentin must have died soon after the photograph was taken. At Collinwood, David and Amy go inside.

At the Cottage, Carolyn finds a photograph of Chris and Amy about the time that Chris shows up. Chris tells her he has changed his mind about leaving Collinsport, but that their relationship cannot continue. He tells her that she is part of the reason he was leaving, when Carolyn asks why she reminds him that he is "the man who never explains." Outside Collinwood, David begins to fret over Amy and goes inside. At the top of the foyer stairs Amy tells David the telephone has disappeared.

Amy tells David she searched all the rooms, even Quentin's room. They go to leave, but the doors close before they can leave. Fortunately, Maggie shows up and rescues them. They tell her they were looking for the telephone, which she confirms she left in her bedroom. She gives them a scolding and they both say they never want to go back inside again.

At the Cottage Chris and Carolyn continue their breakup scene, when Amy arrives. Carolyn leaves crying and Amy asks Chris if he made her cry.

That evening at the Old House, Maggie and Barnabas are continuing their research on Quentin, noticing how little information there is on him while looking though one of the many family history books. Barnabas notes that Quentin had a younger brother about David's age named Jamison Collins.

Upstairs while David sleeps Quentin's music is heard and David awakes to hear the antique telephone ringing. Amy walks in the room saying that Beth woke her and looking and sounding like she is fully possessed. Meanwhile, Barnabas ponders Quentin's life while he was chained in his coffin, neither of them knowing about each other and tries to figure out how to find out about Quentin's life.

Maggie goes into David's room and discovers he is gone, and the telephone is in his room.

Barnabas: Quentin Collins. While he lived, I lay in my coffin in that mausoleum. He did not know about me, nor I him. Now, now I must discover the secret of his life. How... How?

Barnabas: And Collinwood belongs to the ghosts now.

Amy: Beth will protect me from Quentin, and she'll make sure I'm all right.

David: Maggie, I never want to go in this house again.

Dark Shadows - Episode 695 on the IMDb 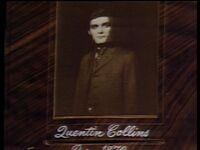 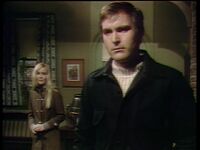 Breaking Up The Girl 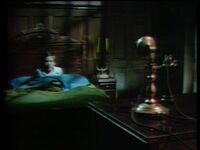 Heeding The Call
Community content is available under CC-BY-SA unless otherwise noted.
Advertisement