Dusk casts its ominous shadows over the Collins estate. Soon another night will come to the great house bringing with it the hope that the terrors from the past will finally be put to rest. One man has a plan but only time will tell whether it succeeds or fails.

Chris has an angry discussion with Julia at the main house about his guilty feelings concerning Sabrina, and then storms out. Before Julia can catch her breath, Professor Stokes walks in and tells her she has to help him with an exorcism.

He says he'll go outside the house but before long, he jerks open the secret passageway in the drawing room to reveal David eavesdropping on him. Stokes knew someone was using the secret panel recently, so he cleverly scattered sugar at the area between the door and the base of the stairs in the passage. Hearing the crunch as someone stepped on the grains was enough to tell the professor that someone happened to be in there. David tries to bluff it out, but Stokes persists in thinly veiled metaphors about possessing and destroying objects until he looks like he might confess... and then clams up. Stokes then begins to declare that the ghost is in the room with them, but David denies it hysterically, until he gives himself away by trying to plead with Quentin. Stokes tells him he must cooperate with him before he becomes permanently possessed.

Carolyn sits in the garden when Chris comes by and briefly tells her he's leaving Collinsport and is sorry it didn't work out between them. They both declare that they love each other, but he won't tell her why he's leaving and she storms off. Julia comes across him and tells him he has to stay for Carolyn or at least, for Amy. She then explains the whole possession thing and he is stunned that no one ever told him anything before. He agrees to stay.

Professor Stokes comes into the drawing room to find Carolyn and tells her to go get David. Julia walks up and Stokes tells her to keep David inside and watch him carefully for signs of success or failure. Carolyn comes down with David and the creepy Quentin music starts playing, as a storm starts and a window blows open. The lights go out and Stokes leaves to go perform the exorcism.

Stokes yells out incantations from outside, throwing David back into hysteria. Eventually, David passes out and all the lights come back on and the storm stops. David wakes up all confused and Stokes goes to his room.

In his room, Stokes smokes a cigarette and then gets up to look in the mirror and sees... Quentin. Quentin laughs his creepy laugh at him, and when Stokes turns around, his room is on fire, with his door locked from the outside.

Professor Stokes: That tells me precisely nothing, which I'm sure is what you intended.

Chris Jennings (about Sabrina): She was young. She was beautiful. She was alive. Now she's a vegetable.
Julia: But you weren't responsible.
Chris: What do you mean, I wasn't responsible? Of course I was responsible. I'm not gonna take that copout anymore.

Julia: Do you really believe that exorcism will get rid of the ghosts?
Professor Stokes: I don't know. Can you suggest a more scientific method?

Professor Stokes (to David): For example, I own this pencil. I can do anything I like with it because I possess it, and it does whatever I want it to. Suppose it no longer did what I demanded of it? I could discard it and find a new one, or I might become angry and decide to SNAP it in two so that it would never be able to function again. Of course, no one would care very much, because a pencil isn’t a living thing anyway. Human beings are living things, David. If they allow themselves to become possessed, they become just as helpless as this pencil.

Professor Stokes: I adjure thee, contemptuous and evil spirits, by the judge of the quick and the dead, by thy Maker and the Maker of all things, by Him who has the power to cast thee into Hell — depart in haste the confines of this house!

David: I’ve got to get out of here! He’s crazy! STOKES IS CRAZY! HE’LL KILL US ALL!

David: This is HIS house! Not yours! You can’t chase him away! You’ll be SORRY!

Dark Shadows - Episode 693 on the IMDb 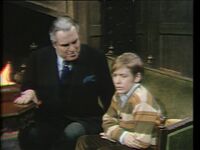 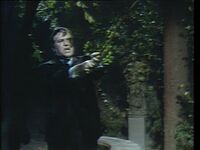 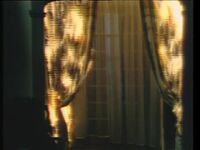 Burning Down the House
Add a photo to this gallery
Retrieved from "https://darkshadows.fandom.com/wiki/693?oldid=142287"
Community content is available under CC-BY-SA unless otherwise noted.