Chris and Julia visit Sabrina Stuart and find that she has been in a state of shock for the last two years, the last time she saw Chris.

The light of a new day has never been more welcome to those who live at Collinwood. For they have just been subjected to a night of terror. They know now that this great old house is haunted by the spirit of an evil man. They will soon learn that this spirit will never rest until everyone who bears the name of Collins has been driven from the house.

Julia and Elizabeth are convinced that the children must be possessed; Professor Stokes agrees to help. Ned threatens Chris that he had better see his sister (Sabrina). A disembodied hand tries to stab Elizabeth with a letter opener; Stokes plans to perform an exorcism on Collinwood.

Chris and Julia visit Sabrina Stuart and find that she has been in a state of shock for the last 2 years (since she last saw Chris). When Sabrina sees Chris, she climbs out of her wheelchair and falls to the floor reaching out to him.

Elizabeth: There is a ghost in this house and he's taken possession of the children and he's using them to terrify the rest of us.

Julia: Mrs. Stoddard, would you have believed me if I had told you there was a woman who was a ghost in your house?
Elizabeth: Before last night, perhaps not, but I believe you now.

Professor Stokes: I am now convinced, Mrs. Stoddard, that every life in this house is in danger.

Professor Stokes (arriving at Collinwood a little late for his 10:00 a.m. appointment): I'm sorry to be so terribly late, Mrs. Stoddard. A very long and tedious faculty meeting. Why they're at such uncivilized hours remains a mystery to me.

Dark Shadows - Episode 692 on the IMDb 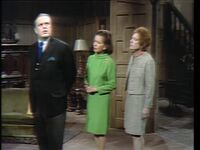 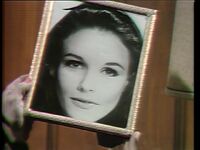 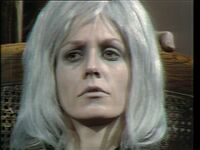 Sabrina After
Community content is available under CC-BY-SA unless otherwise noted.