Maggie tells Elizabeth that David and Amy are possessed; later they find the children begging Quentin to leave them alone.

In the great house at Collinwood, a young woman will soon face the most terrifying experience she has ever known. But she will not be alone in facing this terror. For on this night, the sinister forces that have plagued the great house will begin to fulfill their dreadful prophecy. They have vowed to drive every last Collins from the house, and now the time has come to make good their evil pledge.

Maggie searches the house for David and Amy, but only finds empty rooms and mocking laughter. Doors open behind her as someone unseen follows. Ultimately, she's trapped in a room with the doorknob rattling, as the children's voices tell her that they want her to come out and meet someone...

She finally opens the door, and the kids come in dressed in period costume... with Quentin behind them! David says he's not going to hurt her, but as he comes at her with a cord, it's pretty clear he has alternate intentions.

Quentin tries to strangle Maggie, Elizabeth and Mrs. Johnson walk in and he disappears. Maggie tells Elizabeth that David and Amy are possessed; later they find the children begging Quentin to leave them alone. While watching them in David's room, Mrs. Johnson suddenly finds David and Amy passed out as the storm suddenly stops throughout the house. As Mrs. Johnson explained to Elizabeth what happened, they hear the sound of Quentin's music. As the children awaken, David looks at Elizabeth and says "It is too late, it is too late to be afraid" and begins to laugh evilly with a maniacal grin on his face followed by Quentin's laughter.

David: (to Quentin) I'm not going to let you hurt people any more (he recants a moment later when threatened).

David: It's all Maggie's fault.

Dark Shadows - Episode 691 on the IMDb 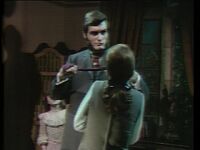 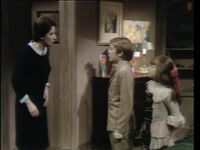 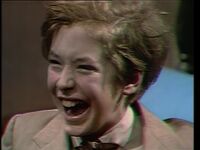 Possessed
Add a photo to this gallery
Retrieved from "https://darkshadows.fandom.com/wiki/691?oldid=143569"
Community content is available under CC-BY-SA unless otherwise noted.