Ned confronts Chris, telling him his sister is still alive and he wants Chris to see her.

Soon dark threatening clouds will gather over Collinwood and long ever lengthening shadows will creep menacingly toward the great house. By late afternoon rain will come, a rain that will begin slowly, but steadily increase into a raging storm. And with the storm will come a terror of unimaginable proportions, terror to a young woman who dares to solve the mystery of unknown forces that seek to possess the very souls of those she has entrusted to protect.

Maggie finds David semiconscioius with a burn on his arm, asking Quentin not to hurt him; when David revives he denies everything and runs out of the house.

Ned confronts Chris, telling him his sister is still alive and in town with him, and he that he wants Chris to see her.

Quentin catches David and Amy in the woods, wishing they had never started playing the game, he now wants them to drive everyone out of Collinwood.

Maggie, suckered into playing games with David and Amy again, searches the house for David and Amy and hears the sound of their laughter along with Quentin's.

Maggie: What kind of a monster is he?

Amy: (singing) With you and your arithmetic, you'll probably go far.

Ned (to Maggie regarding David): Does he give you the slip about once a day?

Amy: Come on out into the hallway. There’s someone we want you to meet.
David: He wants to meet you too, Maggie.
Amy: Yes. Come on out, Maggie. He won't hurt you.

Dark Shadows - Episode 690 on the IMDb 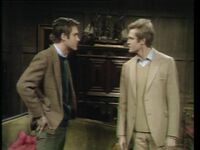 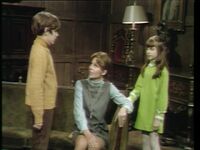 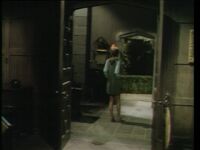 Alone in Collinwood
Community content is available under CC-BY-SA unless otherwise noted.
Advertisement